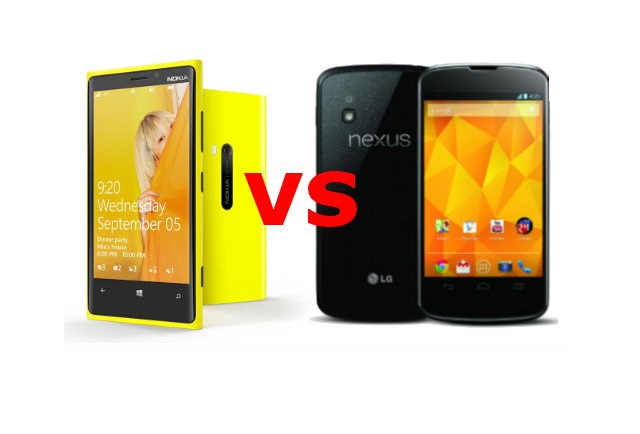 It seems that AT&T is ready to ensure that Nokia Lumia 920 makes it into the hands of as many consumers as possible. Not only is this high-end flagship Windows Phone 8 device only $99 with a two year contract, it is actually only $450 outright as well. Recently, Google announced the LG Nexus 4 would only cost $299 and would be totally unlocked for use on any supported carrier you pleased. In contrast, the AT&T version of the 920 will still be locked to their network but it is only $150 more.

This kind of aggressive pricing certainly could make Windows Phone 8 a more appealing choice for consumers that previously never considered a device running on Window’s mobile OS. You have to wonder though, how does the Nokia Lumia 920 compare to the LG Nexus 4?

In many ways, the LG Nexus 4 is considerably better. First, it has 2GB of RAM and a quad-core processor. In comparison, the Nokia Lumia 920 only has 1GB of RAM and a dual-core processor. One thing worth noting though is that Microsoft did a VERY good job optimizing WP7 devices with single-core processors to give them performance that was seemingly on par with many Android dual-core devices. Don’t be surprised if the same holds true with Windows Phone 8 and the Lumia 920. Either way, there is no denying that the Nexus 4 has stronger processing and RAM abilities.

What about the rest of the specs? Actually, they both have positives and negatives that help even each other out. We’ll highlight a few features that are great about each device:

Here are some of the pros for the Lumia 920:

The bottom-line is that both phones are great devices that will likely appeal to different kinds of users. They both also have the same screen resolution and both offer wireless charging technology. Which should you get? It likely comes down to the ecosystem.

If you want/need the huge app library present with Google’s Android 4.3, go with the Nexus 4. If you are willing to be an early adapter, the Nokia Lumia 920 is one of the best Windows Phone 8 devices around and will make a great smartphone— even if it might not have quite as good a processor or RAM when compared to some of the higher-end Android devices on the market.

Which device would you rather get? The Lumia 920 or the Nexus 4? If Nokia and Microsoft were to eventually release an unlocked version of the 920 for around the same price as AT&T, would you consider it?