Zombiewood is a top-down dual stick zombie shooter. The zombie theme has stretched out so far now that it’s easy to predict what kinds of enemies appeared next in Zombiewood, but even with the clichéd theme, the concept for the game is surprisingly unique.

Gun Bros was most likely the first popular dual-stick shooter game on the touch screen platform, and since then there have been plenty more. The main control concept in Zombiewood is nothing new, and follows the same controls as many other games on the market; you have two joysticks on either side of your device, one for moving your character, and the other for aiming your gun. In Zombiewood, your gun will only fire when you’re holding down on the gun aim-stick, and although you have an endless supply of ammo, you will have a limited amount of bullets in each clip, so reloading your weapons is an important aspect of Zombiewood’s gameplay. 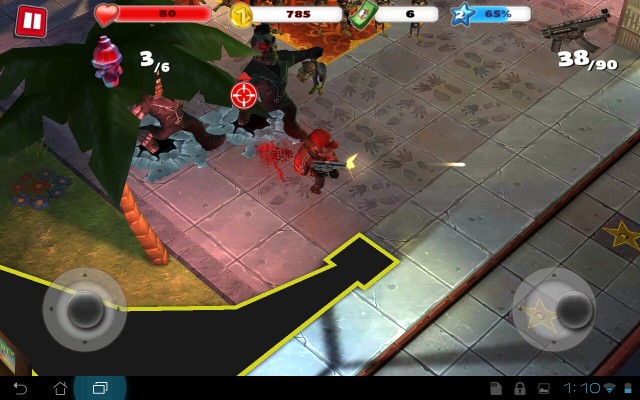 Usually whilst playing Zombiewood the controls are nice and smooth, but every now and then they feel choppy, probably due to the overwhelming enemies on the screen. High end devices should have no problem playing this, but older devices, (even my dual-core tablet) will struggle to navigate through the menus and play through the levels smoothly for a considerable length of time. 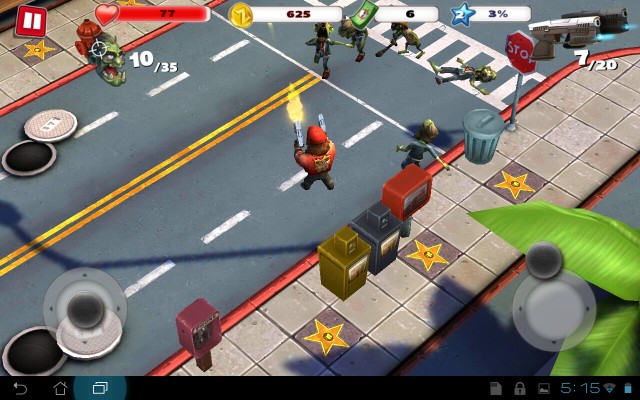 Zombiewood is split into different levels with a few stages per level. Although most of the time the objective is to stay alive for as long as possible, or to kill a certain amount of zombies, occasionally there will be other main objectives, such as protecting monuments or destroying objects within the stage. 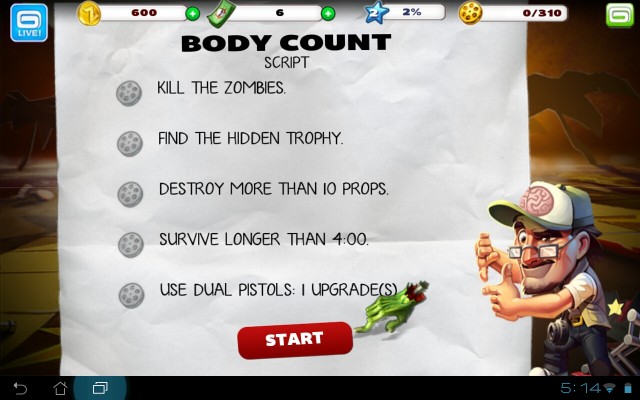 Although the zombie genre is getting old, what I love about Zombiewood is that it has managed to include a new concept with the zombie theme. According to the story, you are an actor that stars in different films for money, and your director gives you a list of things you need to do for each scene in the movie.

Each scene constitutes to a stage, and each level counts as a scene, and once you complete a scene you’ll be awarded some experience points and a cash bonus. The same goes for completing a movie too, but once you’ve completed a movie, you’ll get a constant stream of cash from that movie; the first movie gives characters 500 coins every hour. I think this is a really neat feature, and allows players to earn royalties when they’re not playing the game. 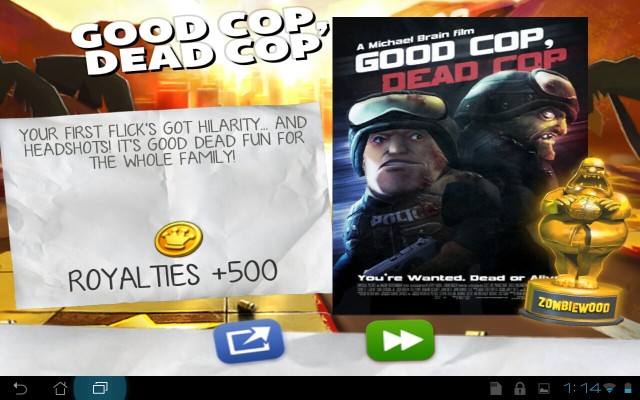 As you earn money and level up, you’ll unlock new weapons to buy in the cash shop. Each weapon has a set amount of upgrades and you’ll be able to buy a variety of different weapon types such as pistols, sub machine guns and shotguns, once you unlock them and have the cash to buy them. The royalties from the movies make it easier to make cash than other freemium games, but there’s no hiding from the freemium content here either.

Like many other free games, Zombiewood has adopted a bar at the top of the screen that shows players their in-game cash, exp bar, and dollar amount. Dollars can be used to buy over-powered weapons, and although you can earn a few in-game, the majority of dollars will come from in-app purchases. 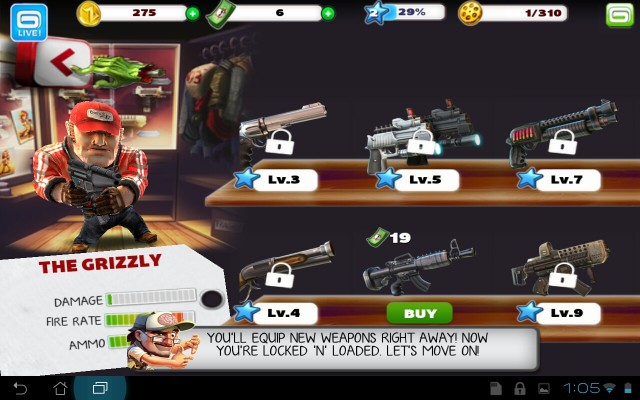 The last feature to be mentioned is the arena, which puts you against a horde of zombies with no real objective than to achieve the highest score you can within the time limit given. This mode is fun for a few extra minutes play after completing the story mode, but what’s cool about arena is the challenge system. You can place bets with your friends using the in-game dollars, and whoever achieves the highest score will win the bet, and the dollars placed in the bet. This is a good way to earn dollars through your friends, and you can easily challenge any one on your Gameloft Live friends list.

The graphics in Zombiewood are spectacular. The game features cartoon cut scenes and the menus are very stylized. The theme carries on in-game too, and Zombiewood has this very caricature style art design, which is both humorous and original. 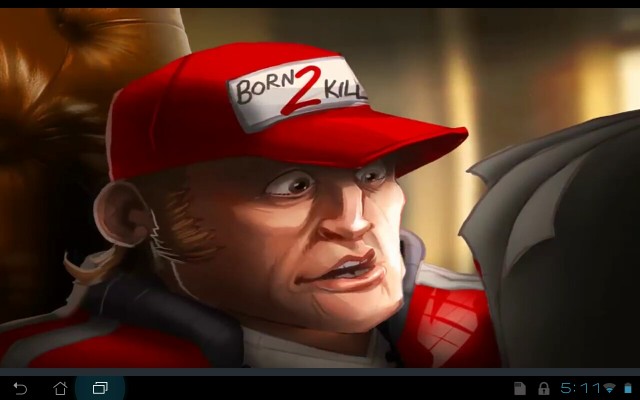 The audio is great, and Gameloft have once again managed to capture fitting sound effects to go with the game, and it’s clear that their development teams are really striving for a professional finish.

Like mentioned before, the game isn’t well optimized for older devices, and the controls seem a little unresponsive at times. The 3D graphics are pretty, but in my knowledge they don’t seem too graphically demanding, so it seems the optimization issues are down to Gameloft, and not the individual devices.