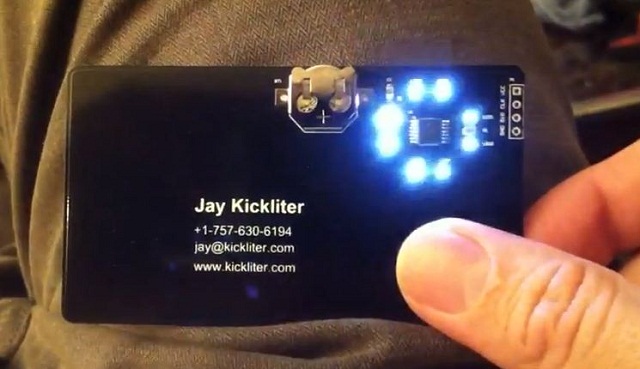 Most business cards are a dime a dozen. Well, not literally, but pretty darn close. They become lost in drawers and hotel rubbish bins all the time, so you’ve got to do something with your business card to get noticed. Jay Kickliter has done just that with what could be coolest geek business card ever. For starters, it features capacitive touch.

No, it’s not a touchscreen display with an embedded version of Bad Piggies or Angry Birds Star Wars, but it is a capacitive touch PCB business card. When the card is handled, a series of LEDs at the top start to light up in different patterns. This will certainly make your card stand out from the pile you typically collect at conferences and networking events.

One of the biggest challenges is getting the cost of these cards down so that they become viable to hand out to the people you meet. Remember, as mentioned, that most business cards are only a couple cents. This version, which is actually cheaper than Kickliter’s previous attempts, still costs $8 each. If you go to a conference and meet 100 people, that’s $800 in business cards. Not exactly cheap.