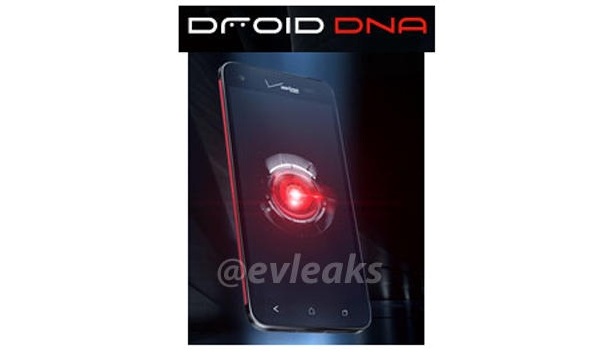 Not only has there been internal document leaks from Verizon to suggest the existence of the Droid DNA, now the famous Twitter tech leaker “Evleaks” has also released a leaked press photo. Additionally, the tweet mentions that the new HTC phablet should arrive in the United States sometime in early December.

The HTC Droid DNA not only has a massive 5-inch screen with a 1080p True HD resolution, it also has a quad-core Snapdragon S4 Pro processor, 2GB of Ram, 16GB of internal storage, an 8MP camera and Android Jelly Bean (though not sure if it will arrive with Android 4.1 or 4.2 Jelly Bean).

If the internal documents tied to this leak prove true, the HTC Droid DNA might only set you back $199 with a two year contract – this isn’t bad considering how powerful the device seems to be. What do you think, interested in picking this up from Verizon or not?