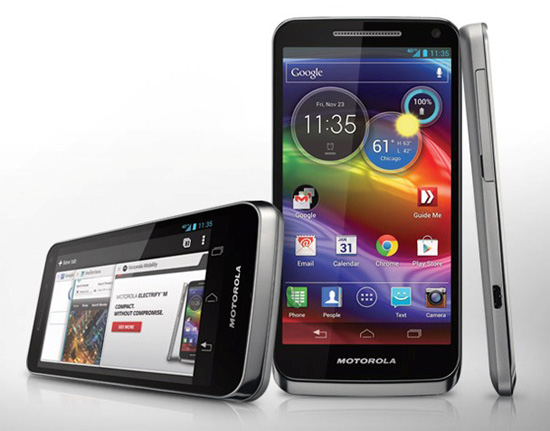 It seems like the Motorola Droid RAZR M is getting a cousin. Today U.S. Cellular announced the Motorola Electrify M, which has an edge-to-edge display and other features that fit very closely with the Verizon-only Droid RAZR M.

The new smartphone has a 1.5GHz dual-core processor, 4G LTE, an 8MP rear cam, 1.3MP front cam, NFC, 2000mAh battery and is loaded up with Android 4.0.4. U.S. Cellular suggested it was more than capable of getting in on the Jelly Bean action, though they have given no specific date regarding when.

The Electrify M will come to U.S. Cellular’s website starting November 8th and in-store by the 9th. The new Motorola smartphone will cost $99 with a two-year contract and a $100 mail-in-rebate for those in LTE markets. Unfortunately, those of us in less-speedy 3G markets aren’t getting as good of a deal and will be paying $149.99 after a $100 rebate.

The good news is that U.S. Cellular has plans to bring its 4G LTE service to 30 new markets by November 5th, and to about 58% of their customer based by the end of the year. So how about it, any U.S. Cellular customers interested in getting their hands on the new Motorola Electrify M?