Gameloft have got to be one of the biggest and most well-known developers for mobile gaming right now, as they’re constantly bringing out a variety of games spread throughout many different genres. For all you sports fans out there, Gameloft have now released the new Real Football 2013, which follows on from the 2012 version.

Team management is one of the most important feats in a decent football game, so important in fact, that Football Manager – a game just about managing a football team – has become an extremely successful series, proving that managing your team can be a whole game on its own. 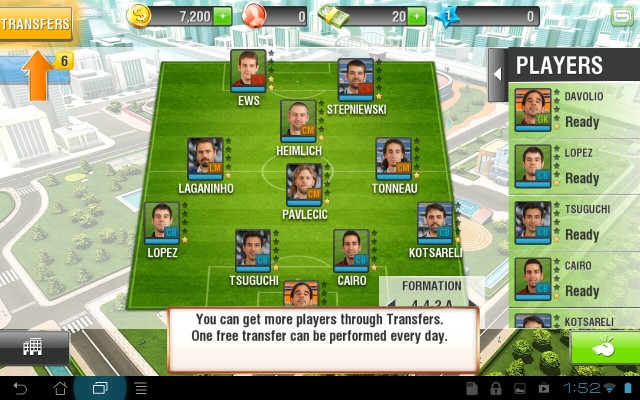 Real Football 2013 isn’t top end when it comes to managing your team, but for a mobile game it’s acceptable. After you pick your team at the start of the game, your players will level up as you play more matches.

Before matches you’ll have a city screen which displays all the utilities available. You’ll be able to heal up and rest your players here, as well as train them for more skill on the field, and increase their income by upgrading buildings and searching for sponsors. This side of Real Football 2013 seems to rely heavily on in-app purchasable currency, with which you can speed up actions within the city utilities. Without the in-game currency you’ll have to wait a preset amount of time for the selected action to be completed, and the time won’t go down if the app is running in the background, which is painful for both you and your device’s battery. 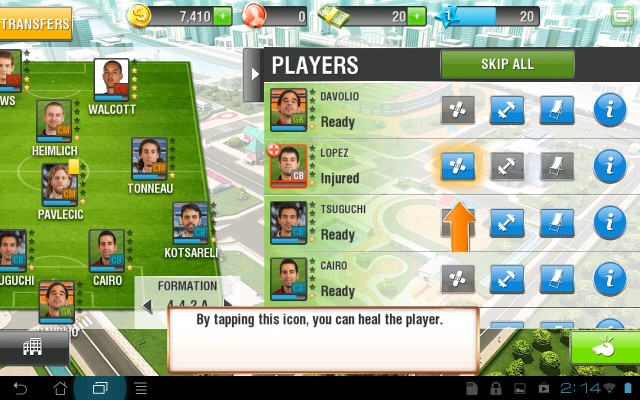 The city utilities do give us a huge sense of progression though, and it’s from here that we can upgrade, buy and manage our player. This allows us to create a team that is personal to our own experiences. You may pick favorites and concentrate on maxing out their skills, or slowly build up the team together; it’s all up to you. 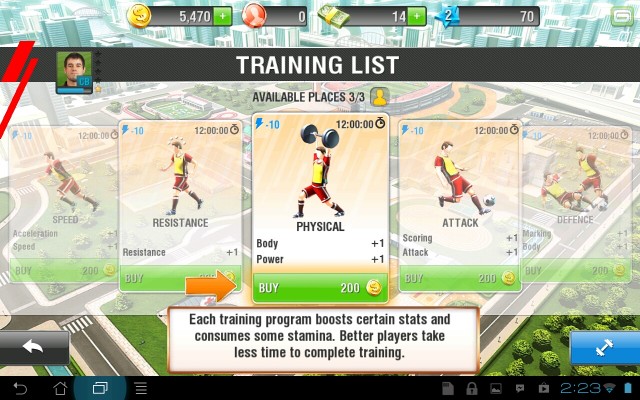 To be honest, I’ve never played many football games, but as soon as I picked Real Football up, I was reminded about how enjoyable football games can be. Real Football starts without much of an introduction, other than the voice of the commentator with an over exaggerated British accent, you haven’t got much information to go by.

Luckily the game is extremely easy to pick up. When in possession of the ball, you have a joystick for movement, and three helpfully labeled buttons; sprint, pass, and shoot. It’s pretty easy to control the character, and there are a few touch gestures to perform interesting moves, and these aren’t explained to you so you’ll have to experiment to find a good tactic for your time on the field. 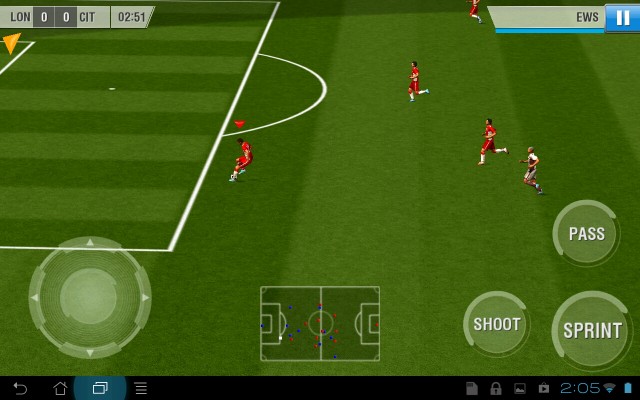 When the other team is in possession of the ball the controls stay in the same position, but the three buttons are changed to sprint, tackle, and press. The controls are equally easy to use, although use tackle sparingly as it usually ends up with your selected player slide tackling another player and leaving the match with a red card. It took me till four players had been called off the match to realize that most of the tackling was done automatically when your player was close enough.

Overall, playing a match or two of Real Football 2013 is an enjoyable experience, and it’s something that would never have been possible on mobile devices a few years back, so a few bugs and limits due to the low spec hardware is understandable. That being said, I really hope that Gameloft finds a better method of player switching for Real Football 2014 because right now it becomes a very irritating aspect of the game. 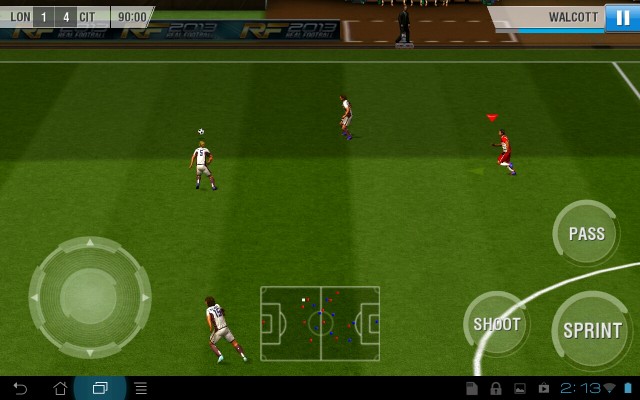 You can either have the player switch mechanic set on automatic or manual, but both have their issues. On manual it becomes frustrating because it’ll often swap your players before you have enough time to react, causing you to swerve the newly selected player in the wrong direction. On automatic, it’s difficult to quickly switch players because you need to lift one of your hands off of the controls and double tap another player.

Gameloft could improve upon this by adding a control-lock for a second or two if you’re using automatic, which would let the CPU control the player for a second after switching so that you have enough time to react to the new change. Another possible method would be to add a player switch button that switches to the nearest player, which would be handy for manual mode. 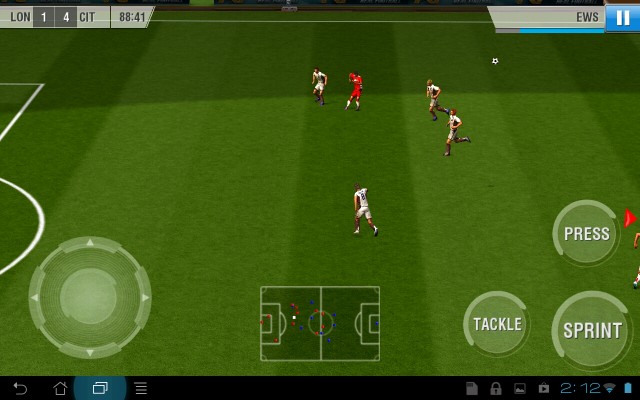 The only real improvement to Real Football 2013 is the graphics, which will only be apparent if you have a higher-end handset or tablet. Other than that, there are a few additions to game mechanics, but Gameloft has disappointingly dropped a lot of features from 2012. There isn’t any way to play with a decent club team unlike RF 2012, and instead requires either a lot of time or a lot of money to upgrade your team within career mode. The current cool down time really needs to be fixed as well. On top of that, Real Football 2013 really needs to address the countdown timer issue which currently only depletes when the application is running on the screen. Previous Real Football player? You may be better sticking with 2012, but if you’ve got a decent device, then you may want to get it for the improved graphics.