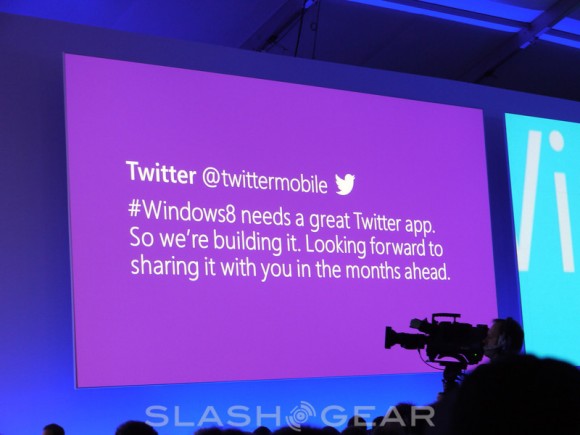 Microsoft Windows 8 is here and the Microsoft Surface is actually selling quite well. While the new OS doesn’t have tons of apps, the new Windows Store has managed to reach around 9,000 worldwide apps. The only thing that Windows 8 users need now is a native Twitter and Facebook app for the new Start Screen UI. The good news is that a Twitter app seems to be on its way.

Today Twitter posted onto its own site a tweet that said Windows 8 needs a great Twitter app, and they are working on something to fit that bill. While 3rd party Twitter apps already exist, having something official coming is good news for Windows 8 early adopters. So when can you expect to get your hands on the official Twitter app for Windows 8? All we know for sure is to look for it “in the months ahead”.

Whether that means sometime this year or after that is anyone’s guess. I wouldn’t be too shocked if they release something before we ring in the new year though. Now Windows 8/RT just needs an official Facebook app and it will be off to a reasonably good start.

Are you considering a Windows 8 device (PC/tablet/laptop/Surface)? For those that aren’t, are the lack a larger range of apps one of the key reasons holding you back?