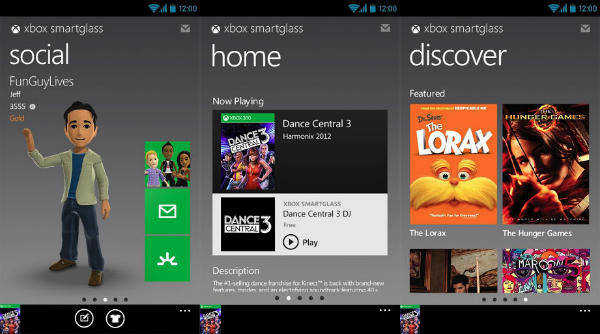 Xbox Smartglass is a way to bring a tablet screen into the Xbox living room media center experience. Basically the app works by connecting your tablet or smartphone up to the screen for pausing, rewinding and even possibly some games going forward. Think of this as a Wii U-type of experience, although not nearly as widely adapted or supported by games– instead its focus is clearly on movies and other multimedia playback between the two devices.

The good news is that you don’t have to have a Windows Phone or Windows 8/RT tablet to jump into the Xbox smartglass experience. Is the integrated experience all that special? Yes and no. You could argue that the Xbox 360 media center remote provides all the interaction you need— still there are some cool features like starting some games and movies on your tablet and resuming them instantly on the Xbox.

Have an iOS device? Unfortunately, Microsoft is leaving you out in the dark for now with the iOS version not expected until sometime in early 2013. Anyhow, if you own an Xbox 360 you can head over to Google Play and check out the app.