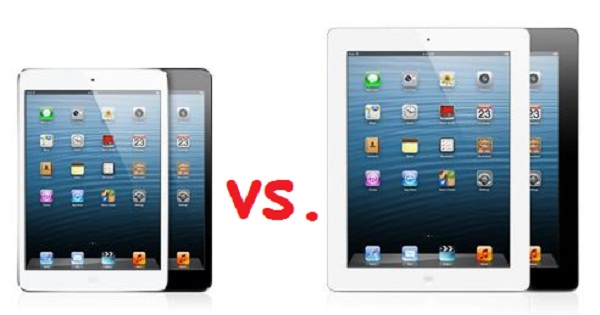 Pre-orders for both the iPad Mini and the 4th-generation Apple iPad started on Friday, but what if you still haven’t decided which iPad is for you? Let’s have a look at some of the most important specs so you can choose the right one for you. For starters, the iPad Mini starts at a more affordable $329, whereas the so-called iPad 4 starts at $499. That’s a $170 difference, which is no small sum of money.

Both the iPad Mini and the iPad 4 come in your choice of 16GB, 32GB and 64GB of storage, and they both come in WiFi-only or with 3G/LTE support as well, though the iPad Mini uses a nano-SIM, whereas the iPad 4 has a micro-SIM. They also both get Siri. The cameras are effectively the same and they both use the new Lightning connector. The iPad 4 is the more powerful of the two with its upgraded dual core Apple A6X processor with quad-core graphics, compared to the dual core A5 in the Mini.

Assuming that you’re bent on an iPad and iOS, and you won’t let Android or Windows tablets enter the conversation, the real decision here is based on two factors: If you want something smaller and more portable, the iPad Mini is likely the better choice. If you want a little more power by way of the A6X processor and you want to have more pixels, then the Retina Display-touting iPad 4 is for you.