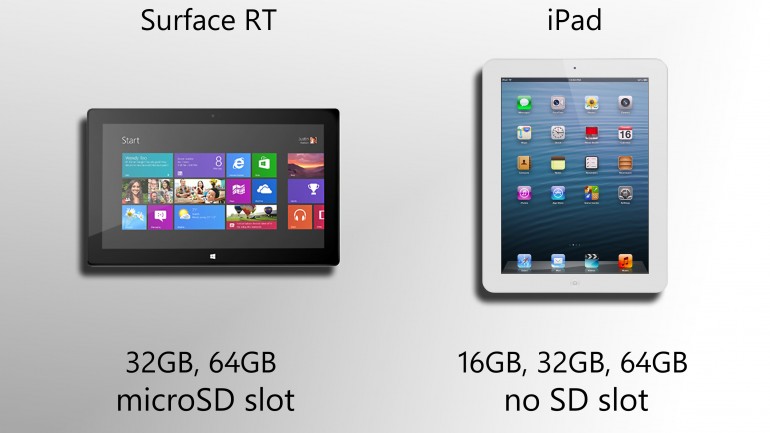 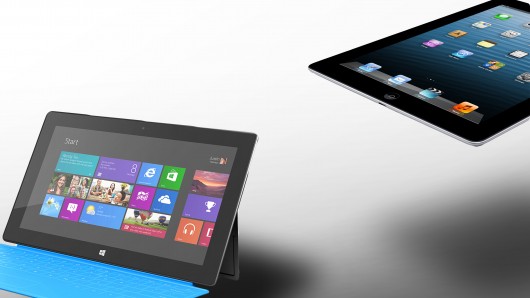 So, today represents a pretty big day for Microsoft, as it marks not only the official launch of Windows 8, but it’s also the launch day for their Surface RT tablet. I still think that the starting price on the Microsoft Surface should have been closer to $299, but in the $499 range, it competes directly against the recently announced fourth-generation iPad rather than the also recently announced iPad Mini. So, how does it compare?

As far as outward dimensions, they’re comparable but different. They’re both 9.4mm thick, but the Surface RT takes on a 16:9 aspect ratio, making it narrower and longer compared to the more shorter and wider iPad 4. The weight is also comparable at 680g (Surface) vs. 653g (iPad). While the 9.7-inch iPad has a much more impressive resolution of 2048×1536 (264ppi) compared to the 1366×768 resolution (148ppi) on the 10.6-inch Surface, the ClearType tech is supposed to make the Surface look sharper than it really is.

Raw power should also be comparable with the iPad 4 getting the dual core Apple A6X processor (presumably running at 1.3GHz) along with quad-core GPU. The Surface RT gets a quad core NVIDIA Tegra 3 (1.4GHz) chip, which is similar to what you find on many current high-end smartphones and tablets. The Surface RT does have double the RAM at 2GB, though, compared to what we think is the same single gig on the iPad 4 as was there in the iPad 3. 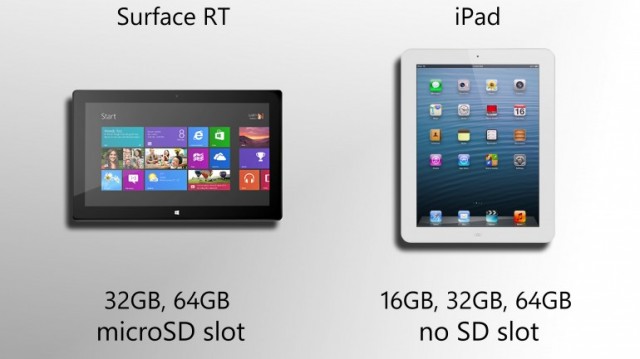 Apple is notorious for not providing a memory card slot and that hasn’t changed in the fourth-gen iPad. You get the 16GB, 32GB or 64GB that’s already on board, compared to the microSD slot on the Surface RT to complement its 32GB or 64GB of internal storage. The iPad is available with 3G/LTE though, whereas the Surface is currently a WiFi-only device. The iPad also sounds like it wins in the camera department too with a 5MP rear (1080p) and 1.2MP front (720p) shooter, whereas both Surface cameras are 720p. They haven’t specified the actual megapixel count.

Of course, there are all those other things that you need to consider. The iPad has access to a tremendously huge App Store, whereas the Windows Marketplace for RT is not nearly as developed, especially since RT can’t run native Windows programs. That said, the Surface has the cool Touch Cover and Type Cover, and you do get a version of Microsoft Office right out of the box.

At the end of the day, which tablet you choose really depends on your needs and preferences. And let’s not forget about the plethora of Android options too, like the less expensive Nexus 7 or possibly the upcoming Nexus 10, as well as trusty standbys like the Galaxy Tab and Asus Transformer Pad families. Whatever the case, it looks like this could be a great holiday shopping season for tablet lovers.