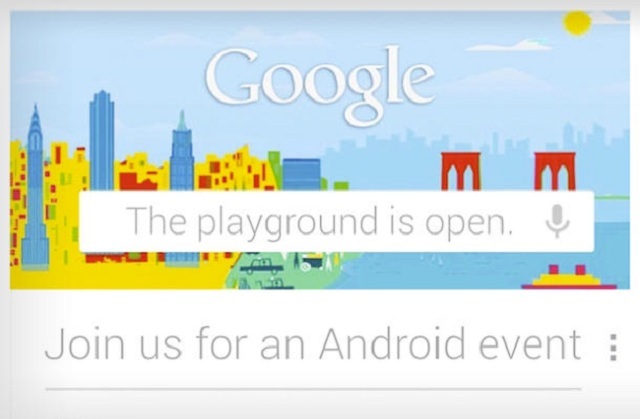 Google is gearing up for a special press event on October 29th that could see the unveiling of Android 4.2, the Nexus 4, an update to the Nexus 7 line, and even a high-end 10-inch Nexus tablet. If all of this proves true, there is a lot to be excited for at the end of this month.

Let’s start by taking a brief look at Android 4.2. While some rumors had claimed that Key Lime Pie (a.k.a Android 5.0) would surface, internal sources familiar with what Google is planning suggest this is just an update to Jelly Bean.

Having a multi-user account system with parental controls means it is much easier to share one tablet with several family members. This is something that seemed to be an advantage with upcoming Windows tablets, so it isn’t surprising that the latest version of Android might be addressing the issue.

Keep in mind that these Android 4.2 features aren’t officially confirmed and could turn out to be different from what we actually see.

Moving on, let’s take a look at the Nexus 4 that is expected to be announced.

LG smartphones aren’t bad, but they generally aren’t all that impressive, either. The Optimus G is one of the first truly exciting devices produced by the company, so it isn’t really that shocking to hear that it is probably going to be rebadged and slightly tweaked into a new form – the Nexus 4.

What can you expect with the LG Nexus 4? A quad-core Snapdragon processor, 2GB RAM, a 1280 x 768 display, 16GB internal storage and an 8MB camera for starters. One thing that might be somewhat surprising is that rumors claim it won’t feature LTE (though the G does). Considering many parts of the world have yet to implement LTE, this might make sense.

The Nexus 7 has quickly become one of the hottest selling 7-inch tablets on the market. With Apple preparing to heat things up with their upcoming iPad Mini, Asus and Google seem to be preparing to replace the 16GB version with an update 32GB model for the same price.

Other rumored changes include the introduction of a 3G variant or even a lower-end Nexus 7 at a sub-$200 price.

Nexus 10 could take on the iPad

Last but not least, the rumor mill says we could see a Samsung high-end Nexus 10 tablet. Not a lot is known about this alleged device but it could be pretty big if it has specs reasonably close to the iPad 3rd generation.

While this is speculation on Mobile Magazine’s part, it wouldn’t be surprising if the hardware lands somewhere in between Apple’s iPad 2 and newest iPad. As for pricing, a $300-$450 price tag might not be out of the question and could bring some really big competition Apple’s way.

As you can see October 29th is looking to be a pretty big day for Google fans. Check back to Mobile Magazine later that day for highlights from the Google announcement. Anyone excited? What do you think Google will unveil there?