Death Dome is an Android action game developed by Griptonite Games, which is now wholly owned by Glu Mobile. Griptonite’s new game has a similar gameplay style to Blood and Glory or the Infinity Blade series, and features Glu’s in-app Glu coin currency.

Just a quick note, if you’re not too fond of gory content then be warned, this game contains a lot of it.

If you’ve played Blood and Glory, you’ll recognize the format of Death Dome instantly. You’ll be put through different battle instances where you’ll need to block, dodge, and parry your enemy until you find a decent window to attack it. All actions in-game are done with touch controls and gestures, for instance, swiping your screen will make your character perform an attack in the direction you’re swiping in, and holding the block button will make your character put his shield up to block an enemy’s attack. 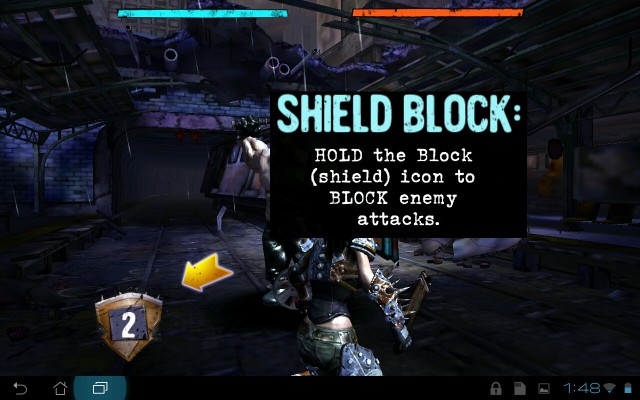 There is also a dodge button on either side of the screen, allowing you to dodge left and right, and parrying can be done by taking a well-timed swipe in the opposite direction of your attacker. We’ve already seen the popular Infinity Blade series by Chair Entertainment with this kind of gameplay, as well as the two Blood and Glory titles, so I’m a little disappointed with Glu’s attempts to cash in on a another clone of their own games.

There are a few differences in gameplay though, and if you’re one for interesting graphic styles and regular changes of scene, you may prefer Death Dome over any other titles that it has been inspired by. 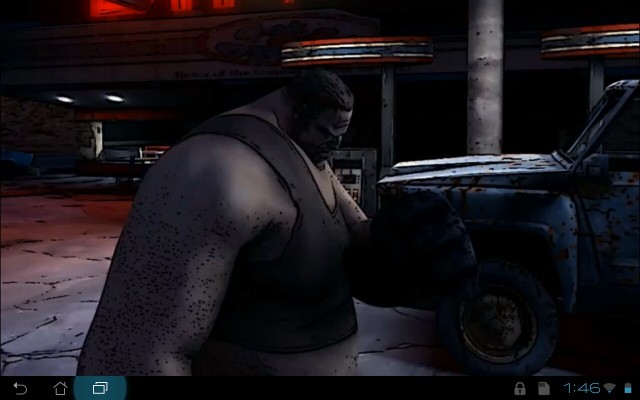 So, here’s the basis of the story. A virus has run rampant through the city causing many to die within days, but there are some the lucky ones. Others have fallen victim to the ‘M’ virus, causing mutations to spread through their body. The infected were quarantined off in a bio-dome force field to keep the rest of the plague spreading further than the city. Ironically the no-named protagonist finds herself immune to the disease and trapped within the bio-dome along with the violent abominations.

You can tell straight away that Death Dome has been heavily influenced by many other games and has incorporated them into its own rather sparse story. There are cut scenes after each stage giving a little insight into the main character’s motives and the world she lives in, but for the most part, her identity remains a mystery. It’s hard to determine whether the developers left the story mysterious for a real purpose or if they had just ran out of imagination. Either way, the slightly empty story allows us to use our imagination, and there are certainly a lot of concepts in Death Dome to give us a solid feel for the game. 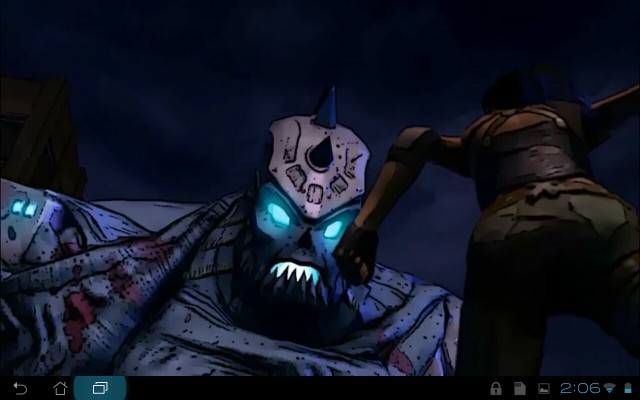 Although Death Dome is heavily-instanced, Griptonite have done a great job to make the game feel a lot less restricted than it truly is. There are plenty of different scenarios to encounter, as well as different background environments and a huge variety of enemies with a nice mix of attack styles.

The level select screen is also displayed on a city map, giving us the idea that our character is travelling to her next location whilst our device loads up the next battle. Most areas also have a small mini-game before an enemy appears, which usually involves tapping areas on the screen for loot and in-game currency. 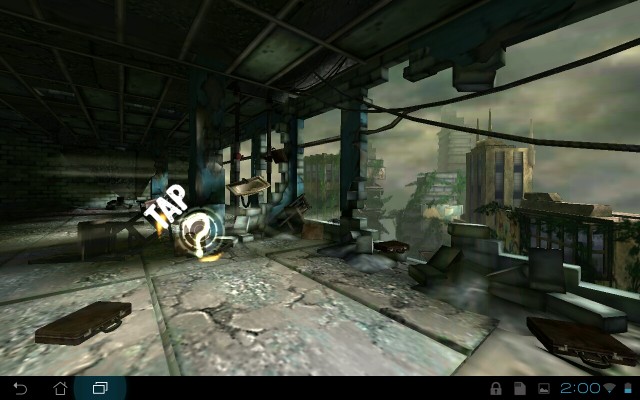 Don’t get me wrong, Glu mobile has made some brilliant titles, but what always puts me off is their hugely freemium based play schemes, which usually require you to make a purchase of some kind, or download a load of promotional apps. Death Dome is no different here, and just like Blood and Glory, spending in-game cash doesn’t just improve your gameplay, it’s pretty much going to determine whether you win or lose at the game. Without it, gameplay becomes slow and boring, and even if you did manage to keep at 100% health throughout a battle, as the game progresses, enemies become too powerful for our weaker weapons. Buy a weapon from the marketplace, and you’ll suddenly be extremely over-powered and killing enemies becomes much too easy.

I totally understand Glu’s need to create a steady income, but I’d appreciate it a lot more if they balanced out their current system. I definitely have to applaud Glu for the cross-game currency though; if you buy Glu coins on one game, you’ll be able to spend it on any games within the Glu games list. 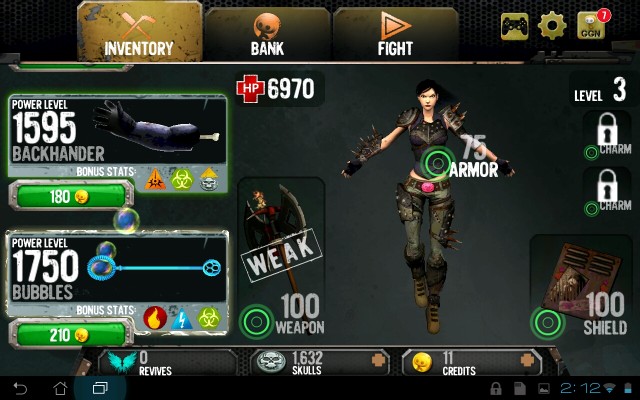 Aside from the in-app purchases, the items and equipment in Glu are very appealing, and there’s a good variety of weapons and gear to pick from, so you’re bound to find something you like in-game. Death Dome has some serious looking badass gear, as well as some comical items like over-powered bubble blowers and unearthed stop signs.

Glu have always tried to aim for a professional finish to their games, and it’s no different with Death Dome. The sounds are on par and there is voice acting to accompany the cut scenes too. The character models have been produced to a high standard and the background scenes are beautifully grim and portray the apocalyptic feel of the game to a great extent. The user interface is intuitive and many options are easy to navigate to without going through an unnecessary amount of menus and splash screens.