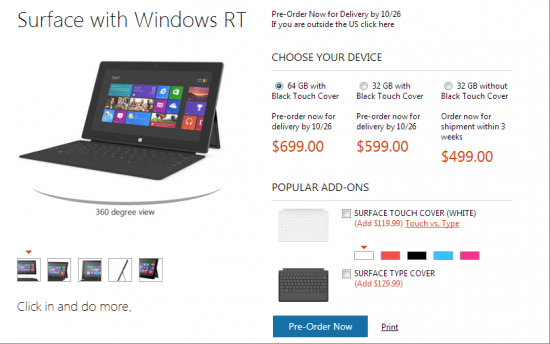 Yesterday, Microsoft began taking preorders for their new tablet, which is expected to launch on October 26th. Microsoft Surface marks the first time that the boys at Redmond directly are releasing their own PC hardware. This still leaves a lot of questions, such as what the build quality is like. There is also an unproven new OS (Windows 8 with a new modern GUI) under the hood. All of these factors could slow down Microsoft Surface early adoption, right? Maybe not – they have already sold out preorders of the first shipments of 32GB Surface RT inventory it seems.

While the preorder information for the 32GB Surface originally read “delivered by 10/26th” it is now pushed back by several weeks. More than likely, this means that preorder sales have been very kind to Microsoft during their first day. The Surface packs an NVIDIA processor, 2GB of RAM and alot of the same power as the 3rd generation iPad. It is also priced the exact same, though it also includes Microsoft Office and 32GB of storage instead of 16GB. What it doesn’t have is a Retina display or all that many apps yet.

What do you think, interested in Microsoft Surface or not?