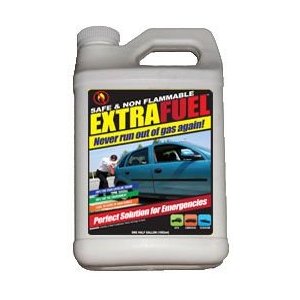 I just got back from a trip to Maui not that long ago and while there were certainly gas stations in the major towns, there were seriously long stretches of road where there was absolutely no gas, no food, and virtually no civilization. It would be astronomically terrifying if I suddenly found myself out of gas, stranded on the side of the road. That’s part of the reason why some people carry a jerry can of gas with them in the trunk.

The problem is that carrying around that jerry can of gas may not be particularly safe. There are fumes to worry about, not to mention the possibility of leakage and possible combustion, fire and explosions. A much safer alternative, it seems, is a product called Extra Fuel. It works with any regular gas engine in a car (pretty sure it doesn’t work as a diesel alternative), but it doesn’t contain the volatile chemicals found in conventional petrol gas.

The volatile gases–like butane, pentane, and hexane–are really the problem, because they can heat up on a hot day, pop a vent in the jerry can, and fill your car with dangerous fumes. Extra Fuel doesn’t have that, but your engine can still use it. Extra Fuel has an octane rating of 91 and is supposed to give the same kind of mileage as regular gas. Better still, it has a ten-year shelf life.

A half-gallon jug is $24.99, so Extra Fuel is definitely more expensive than the stuff you get at the pump, but it may be a very worthy investment for some road trip peace of mind.