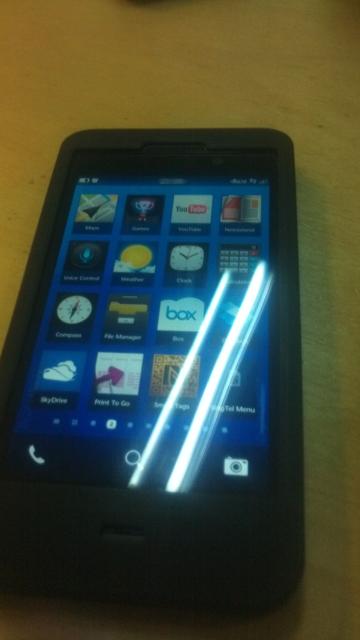 RIM Blackberry was once the leader of the smartphone world, seems like a very long time ago doesn’t? In the tech world, things change rapidly. Giants fall and are easily replaced. The question though, is if this once-giant can get back up again. RIM likely hopes that Blackberry 10 will be its savior, but the jury is still out. We don’t know what the future will hold for RIM, but at least we now have a few leaked photo of the L-Series that can give us a glimpse of what to expect starting in early 2013.

The photo was first sent to Berry Review. The picture is a bit blurry but falls in line with some of things we’ve seen before. The device also indicates a few apps that it will be able to run. In the picture you can clearly see Dropbox, Maps, YouTube, Skydrive and Box.

There is a lot of ground for Blackberry to catch up to, and it is hard to say if they are up for the job or not. New competitors like Microsoft’s Windows Phone 8 and Mozilla’s Firefox OS also mean that Blackberry 10 isn’t the only new mobile OS making the rounds soon.

What do you think? Is Blackberry worth considering at this point or not?