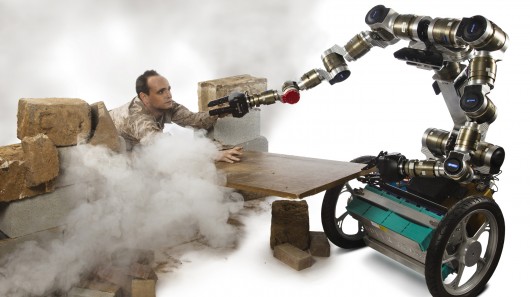 Most of us have at least heard of the TV show Macgyver before. You know, about the guy who can basically take just about anything and turn it into a true solution to a problem? Well, that’s what Professor Mike Stilman and researchers at Georgia Tech are attempting to do with a robot creation of their own, aptly named the “Macgyver bot”.

Up until now, most robots have generally been designed to handle a few tasks at hand that are easy to understand and pre-programmed. This type of robot is quite a bit different and could eventually be perfect for emergency response, sending them into disaster zones and giving them the ability to analyze the situation and use the tools around them to complete their current missions.

More often we are seeing robots make their way into fire zones, war zones and other situations that are very intense and traditionally reserved for human response. Unfortunately, having to be told exactly how to get a job done limits their usefulness.

Creating a robot that actually thinks and analyzes is no small feat. According to Stilman:

“Our goal is to develop a robot that behaves like MacGyver, the television character from the 1980s who solved complex problems and escaped dangerous situations by using everyday objects and materials he found at hand.”

“We want to understand the basic cognitive processes that allow humans to take advantage of arbitrary objects in their environments as tools. We will achieve this by designing algorithms for robots that make tasks that are impossible for a robot alone possible for a robot with tools.”

The U.S. Navy has already shelled out a $900,000 grant aimed at helping the project along. As you probably already guessed, the robot is far from being ready for truly “dangerous situations” at this point. Below you can check out a video of the Golem Krang, a robot that will be the basis of the new Macgyver bot project.