Although this review was done using an Android handset, it’s likely that the iOS version offers a very similar experience.

Judge Dredd vs. Zombies is a top-down shooter developed by Rebellion games, a well-known PC and console developer. It’s no doubt that the game has been released to help promote the new Dredd movie, but with that said, the gameplay is completely apart from the story within the movie, but the game can be enjoyed without any regards to the Judge Dredd story or universe.

I’m not so sure what’s appealing about zombies anymore, but they still seem to sell extremely well. In fact, if we were to ever fall victim of a zombie apocalypse, I wouldn’t be surprised if they were all boxed up and sold as exotic pets. Even with the less-than-original enemy designs, the combat system is a little different to other top-down shooters, and it’s something I’ve taken a big liking to. 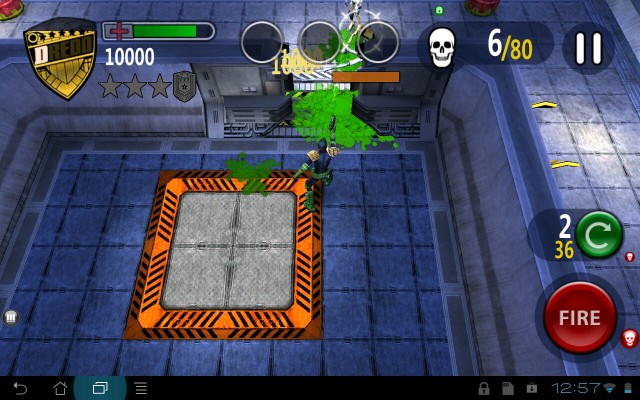 In many other top-down shooters on a touch screen, we’re usually given a dual stick control system where one stick controls your character’s movement, whilst the other stick controls the direction of your onslaught of never-ending bullets. In Judge Dredd, you’re given one stick for movement, and a static button for firing. The game has a very accurate auto aiming feature that usually targets the closest and most dangerous enemies first, and also allows you to quickly change target by tapping enemies on the screen. It’s not doing all the work for you, but it makes it easy to hit your targets, which is especially helpful considering the somewhat low ammo supply.

While these controls aren’t exactly new, it’s the way Rebellion has handled each of the separate weapon mechanics in-game that make things unique. You’ll be able to buy the rather clichéd weapon types within game with coins earned from each stage. Each weapon has various starting stats such as reload speed, fire range, and damage that can be further upgraded using in-game cash. What makes these weapons different is that each weapon type has a distinct method of firing. Shotguns require you to get up in the zombies face to do the most damage, whereas the sniper has an advanced aiming mechanism that with good timing allows you to take one-hit kills at the oncoming zombies. There’s also an average assault rifle for the classic pray n’ spray action. Each weapon seems to be useful in different situations, and it’s extremely frustrating that we cannot equip more than one weapon at any given time. 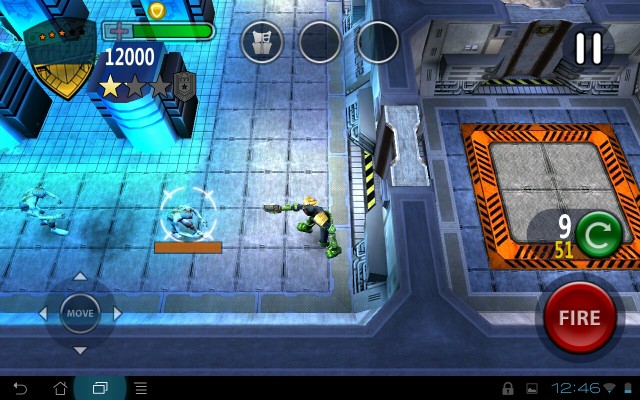 Judge Dredd features a basic campaign that challenges you through increasingly difficult stages and arenas where you’ll be asked to complete repetitive tasks such as killing a certain number of zombies or reaching a finish zone. The campaign doesn’t really have much of a backstory, but each zone has a small box of text giving information on what Dredd is apparently doing within the eight stages in each zone. There is also an arena mode which allows you to choose different unlocked locations to fight in. The arena mode works very similarly to the campaign mode, just without the linear progression.

When you complete a stage you’ll be given a star rating. The star rating is based upon the amount of points you have collected within the stage. Each zombie kill will get you a small sum of points, but if you’re reaching for three stars you’ll need to kill zombies quickly to rack up a multiplier which will be displayed in the top left hand of the screen. If you stop killing zombies for a quick breather, your multiplier bar will deplete. Luckily there are shield pick-ups within each level that give you a few extra points and keep your multiplier going whilst you’re out of the action. 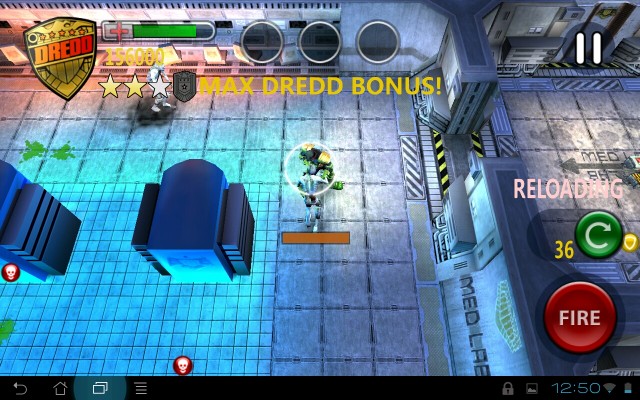 One of the biggest concerns I had about Judge Dredd vs. Zombies is the excessive difficulty curve of the game. The first zone was fairly easy to complete, but as soon as I had reached the second zone, I found it almost impossible without any upgrades and would quickly die within seconds of starting the stage. This also points to the heavy freemium aspects of the game. There are only a certain amount of credits you can earn from each stage, and after getting a three-star rating on every stage, it’s pretty much impossible to earn any more without spending real cash.

Aside from the dull-looking zombie models, the rest of the game is actually quite visually impressive. The 3D stages have been well-lit and each stage has an overall design separate from the others. Each zone will have a different theme, which mixes things up a little and keeps the background scenery from getting dull.

If you’re a fan of Judge Dredd, you’ll be happy to know that the layout of the application has captured the style of the Dredd universe nicely, and it feels very close to home in terms of futuristic aesthetics and the dark vibe that the 2000AD comics give off.

The music and sound effects within Dredd vs. Zombies is on par as well, and like many action games for mobile, it really completes the experience when playing with the sound switched on.

Judge Dredd vs. Zombies can be downloaded on both iOS and Android.