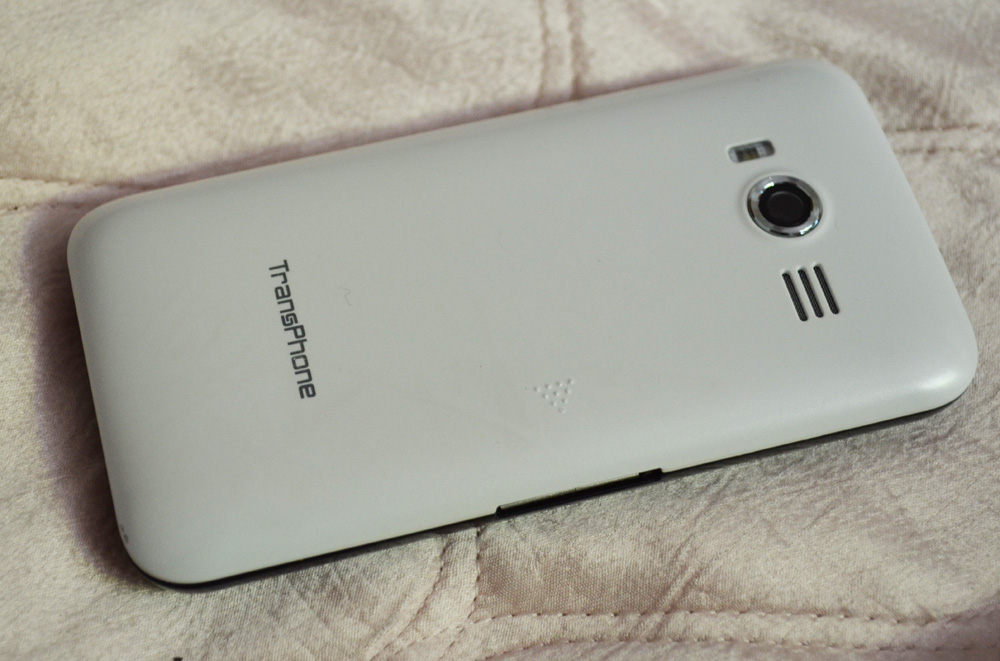 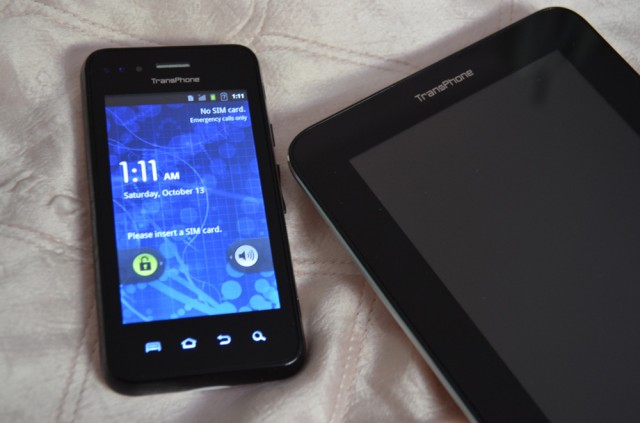 The TransPhone by ExoTablet, a frankestein creation of technology, merging the smartphone and tablet using a sliding dock mechanism. The concept is ingenius, but can it satisfy a road warriors insatiable need to find that all-in-one device?

We got a pre-release version of the TransPhone and have had a couple weeks to put it through the wringer. Real world use and in the lab; the TransPhone definitely has a unique concept going for it.

The tablet dock is a 7-inch multi-touch TFT LCD, it activates once you slide your TransPhone into it’s rear docking mechanism. Then the magic begins; your smartphone is now a 7-inch tablet. Mind you the resolution is the same 800×480, it’s just on a bigger screen. Inside the tablet dock is an extra battery pack (2850 mAh) giving you a convenient dual power supply for when you don’t have time to plug in. Also dual speakers are on the rear to enhance your multimedia experience.  A couple toggles also allow you to lock the orientation, and another to switch over to the tablet battery pack. 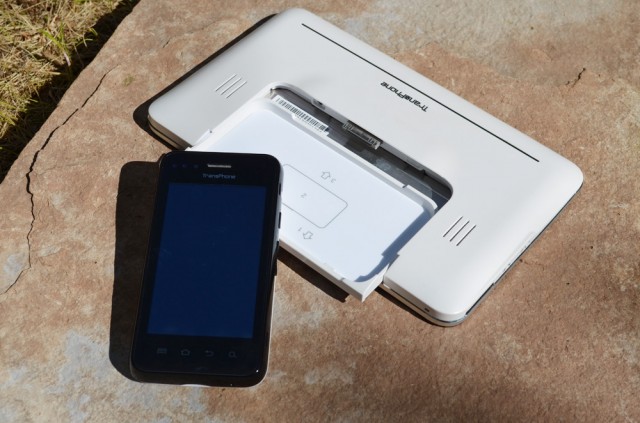 In your hands your though, you can tell you are holding a MIC device. It’s light, hollow and plastic allover. But it does have a nice form factor with its curved back. The TransPhone logo is under the earpiece which has a funky retro design. The finish is shiny black on top and around the sides and soft matte white on the back plate. A small triangle on the back tells you where to dock the TransPhone in to the tablet. At first it was confusing, that’s how I thought the back plate would be removed to insert a SIM, but no, it’s just to direct you in the tablet dock. The back plate is removed typically from the bottom up. The dock connector port is an inverted Apple 30 pin with maybe 1 mm more thickness. It’s not interchangeable with an Apple cable, and even though an Apple cable will plug in to the TransPhone, it won’t charge it. 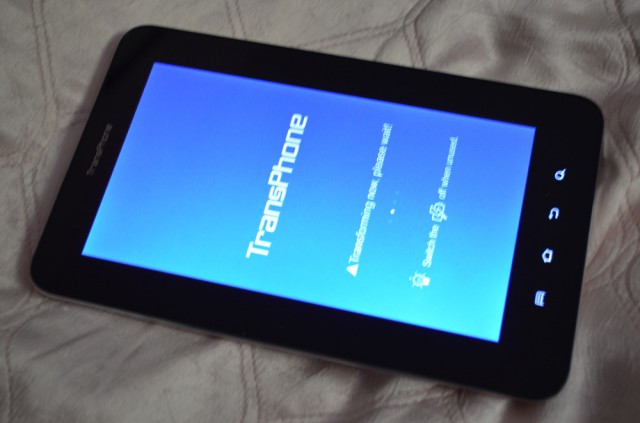 Running Android 2.3.5, the TransPhone does seem to be slightly dated in appearance. Although the 800 MHz CPU seems to handle 2.3.5 quite well, the only lag I have experienced is on first boot when loading icons on the Android desktop.  After that it’s very responsive and quick in switching tasks and loading up applications. It does not come bundled with anything but yes, its works with the Google Play store. 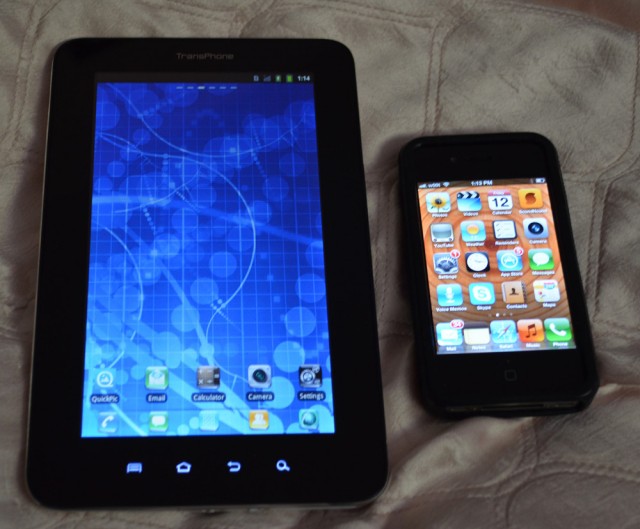 First and foremost this is a smartphone, so call quality should be one of the most important things. Aside from a glitch we only encountered once where the speakerphone didn’t activate, audio is clear and crisp but lacks the bandwidth we’ve heard on higher end phones like the iPhone 4s or Galaxy S. It could be described as tinny or hollow.

The tablet dock is a great concept, but doesn’t perform as we would have liked. Enlarging the 800×480 WXVGA display from a 3.5-inch screen to a 7-inch one is very obvious. You can see tremendous pixelation overall as your desktop and icons are extrapolated through pixel stretching. But it gets worse. You would expect to start from where you left off when you were using your smartphone, but no, for an odd experience that just kills any flow, when you dock the TransPhone in the tablet, the springboard is relaunched and whatever you were doing is now gone. Yes, it’s gone and you must begin once again. This has to be the worst thing and really hurts the devices ability to provide the user with a seamless experience.  I personally can’t get over that, but if it’s not a big deal to you and you’ll be ok with starting over with what you are doing whenever you wish to switch between phone and tablet, then you’ll be fine.

It’s a fun little Android phone, a great concept and will appeal to many new Android users who are on the fence about buying a tablet and a phone and really just want’s to get in on what’s new. It would make an amazing first phone or tablet for many, but seasoned mobile warriors will probably want to look elsewhere.