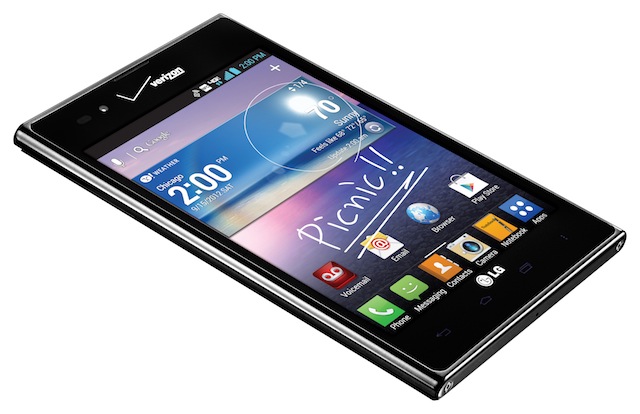 When it comes to Android manufacturers, LG is far from leading the pack. It isn’t that they create bad Android devices. Instead, they simply create hardware that isn’t nearly as inspiring or impressive as what we see from Samsung, Motorola and other leading brands.

The LG Intuition is the company’s attempt to break into the phablet market, which was invented – and is ruled  – by Samsung with the Galaxy Note and upcoming Note 2. Is the Intuition something special this time around, or does it continue LG’s tradition of creating devices that are pale substitutes next to their competition? Let’s find out. First we will take a look at the brief video that shows off the look, feel and some initial impressions about the device.

The LG Intuition isn’t merely a rip-off of the Samsung Galaxy Note 2. Sure, they are both phablets. The big difference here though is that LG is not afraid to venture off the beaten path. The boxy shape, sharp corners and 4:3 aspect ratio make the Intuition stand out in a crowd. This is probably the biggest ‘feature’ for the device– it is a conversation starter. During my time with the LG Intuition I carried it around with me when going to the store, doing errands, etc.

I utilized the device as my primary phone for a few days and found that putting this monster in your pocket wasn’t as bad as I thought it’d be. I also was constantly interrupted by onlookers that saw me holding the device, “Is that a smartphone?”. And then I’d tell them what it was, and so forth.

The design on the LG Intuition is bold and boxy, but it is the size that really makes it noteworthy. The buttons are minimalistic. You’ll find a volume rocker on the left side of the phone, on the right is just a SIM card door. The top has a power key, Quick Memo key and a microUSB charger. As for the back, you have an 8MP camera with single LED flash and speaker slots.

On the front you find a 5-inch iPS display with a 1024 x 768 resolution. There are also four capacitive buttons for Back, Home, Menu and Multitask. While ICS doesn’t need actual buttons, some users prefer having them over virtual keys.

This might annoy some of you, but there is NO micro-SD expansion for increasing storage. The rubberdium stylus also has no slot, which is a move that I completely don’t understand.

So what is underneath the hood in the LG Intuition? First, let’s look at something on the surface: the display. I already mentioned a bit about it. It is 4:3 and has a 1024 x 768 resolution. What else? The colors are sharp and it works very well. One problem, the unique size might be a great way to make this phone stand out, but it also seems to defeat the purpose. 5-inches makes it too big to work nicely as a one-handed smartphone, and yet the boxes for videos and some apps make the multimedia experience not even close to what you’ll find on the Note 2.

Taking a deeper look at the specs, this phablet comes with a 1.5GHz dual-core Snapdragon S3, 1GB of RAM and 16GB of storage. The S3 might not be as impressive as an S4, but it still gets the job done. As repeatedly stated in my video review, this is not as powerful as the Note. Even so, you won’t have to put up with freezing and stalls. The smartphone is a smooth operator at almost anything you throw at it.

This phone has excellent performance, it just won’t stomp over the competition.

The LG Intuition has some reasonably interesting software. The new UI isn’t nearly as bloated as past customized LG skins. It also has Quick Memo, which works great. I love the idea of pressing a button to instantly launch it. I also like that you can write onto screenshots with ease.

Is Quick Memo as good as Samsung’s S-Memo? It works well enough, but S-Memo certainly has some extra bells and whistles, including handwritting recognition. The accuracy of LG’s pen is also not quite as good. This probably won’t matter for most Intuition owners because they will either keep their pen in the box or lose it in ten minutes thanks to no holder built into the unit. Maybe there is a case for this thing that has a holder? That would be worth looking in to, though the Intuition is big enough without adding extra bulk.

Other software includes LG’s SmartShare, which allows easy transferring of files between DLNA-enabled devices. A file manager is also included and a task manager. Both of these aren’t as good as some 3rd party alternatives, but I still think it was a great move on LG’s part to include them out of the box.

Verizon also throws some of its junk onto the Intuition. You’ll have the Amazon Suite, Color, IMDb, My Verizon, NFL Mobile, Real Racing 2, Viewdini, VZ Navigator, Shark Dash and Zappos. 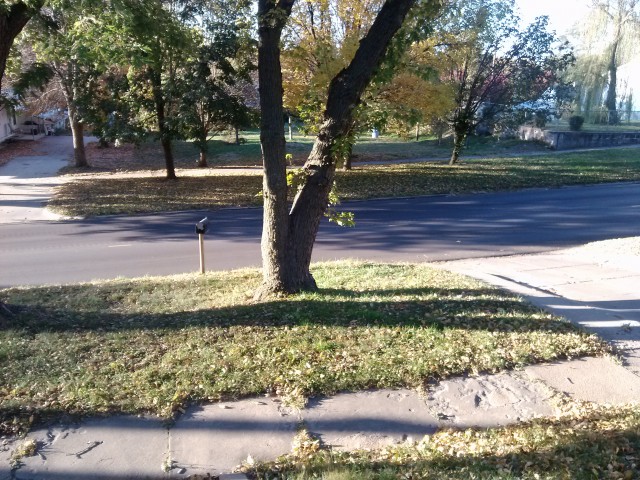 A picture is worth a thousand words. As you can see, the 8MP camera is more than capable of taking a decent picture. There are also some neat features baked in to the camera such as Cheese Shot. This basically allows you to say “cheese” and the camera will snap the photo. This could be great if you place it in a stand and want a group picture. There is also a dedicated Panorama mode.

The picture isn’t going to blow you away, but it is decent enough. Unfortunately, it takes several seconds to load up and focus images. This is a really slow camera for a device that is aimed at the mid-tier market.

As for video taking? There is 1080p video, but it is slow and doesn’t exactly have masterful results. They aren’t awful, either.

The LG Intuition has some pretty big shoes to fill when it comes to the competition. The Samsung Galaxy Note is an impressive phablet, and the LG Intuition can’t even begin to touch the Note 2 based on raw power.

The 4:3 ratio aspect takes some getting used to, but I do admire LG for doing something different with their phablet design.

So who should get this? Those that don’t mind the aspect ratio for starters. If you want to stand out, this is also a great choice. The LG Intuition is so radically designed that you likely will either love or hate it. You might not even know for sure what you think until you get your hands on it. Many phones out there could be ordered online simply after reading some reviews– I’d recommend that you test out the LG Intuition at a Verizon store if you are on the fence about it.  Or grab one for $150 on a 2-year plan.

For now, there is little choice in the phablet category for Verizon subscribers and I truly think LG did a reasonably good job here.