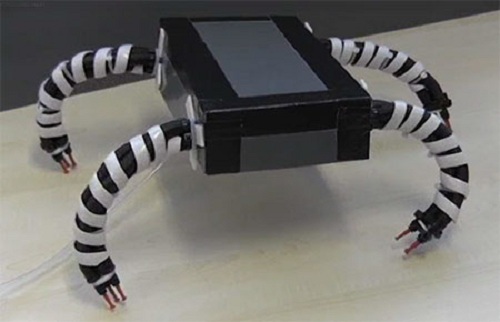 Animal robots have become quite commonplace. In fact, a robot that isn’t designed after a human being or another animal would probably be more out of place. Today we are taking a look at a robot that uses four air-powered limbs that take inspiration from the body and design of an octopus.

Even though an octopus has no bones, still manages to walk around in a way that isn’t too different from other animals. Researchers at the Italian Institute of Technology and Kings College London decided to see how a similar system would work for a robot.

By adjusting the amount of pressure in the tubes, the robot can withstand quite a bit of weight. To put the idea to the test, they even dropped a staple gun onto the robot– it wasn’t a problem. Other strange tests include landing on its four feet just like a cat. It can also wiggle across the room using its air-filled ‘legs’.

Cool idea, but is there a practical side to the robot? Yes and no. Part of the fun of robotics is simply seeing what they can do while stretching the imagination and the bounds of what is possible. Even so, the researchers suggest uses like exploring other planets, swimming in the ocean and even detecting mines.

Check this robot out for yourself in the video below.