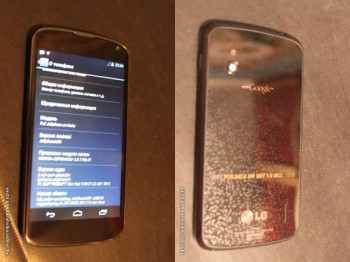 The LG Nexus rumor is one that seemingly won’t go away. Does that mean it is true? Probably, but there are no guarantees until we have LG and Google confirmation. Today’s LG Nexus gossip has to do with leaked photos of the alleged device.

Most of LG’s hardware tend to favor a blocky design, but- if these photos are legit – we are finally getting something different this time around. These photos show a backing that has a crystalized look. A version with a Nexus logo on the back and a slightly different material backing is also said to exist.

LG isn’t a bad mobile device maker, but their designs generally aren’t that inspiring, either. The LG Nexus could finally be a step in the right direction, sporting a refreshing look and a powerful quad-core Snapdragon S4 Pro chipset (so says the rumors).

If you are used to the old rules of the Nexus program, you might be a little confused by now. There have been rumors of this LG Nexus and even an HTC Nexus rumor, what gives? Apparently, Google is opening up the Nexus line to cover a wider range of Android smartphones and even tablets. Keep in mind this is all based on rumor and speculation, Google hasn’t officially said anything about the future of the Nexus smartphone line.

Which these smartphones sounds more up your alley? The new LG Nexus or the rumored 5-inch HTC Nexus device? If neither seem to fit what you are looking for, don’t worry. If the opening up of the Nexus line proves true, there could very well be new Nexus models from Motorola and Samsung in the near future as well.