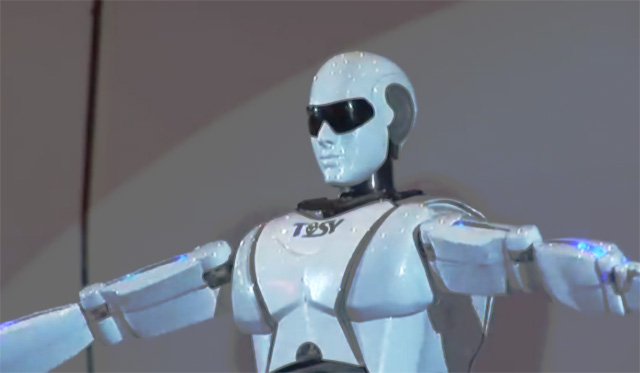 What could possibly be cooler than a robot? How about a robot that dances to all your favorite songs? Well, those at CEATEC 2012 may have been lucky enough to have spotted an appearance by none other than mRobo, the self-transforming beatbox/dancer, capable of grooving to your tunes from your iPod or MP3 player.

The robot, which is mainly white in color, starts off looking like an average inanimate speaker until it catches you off guard and begins transforming into a fully-fledged humanoid. The Michael Jackson wannabe then starts grooving its body parts to the music as it plays sound through its rumbling stomach.

It’s far short of the skills of a professional dancer, but it is quite amusing to watch. The robot itself doesn’t have any price tag, but is around the same size of a Robosapien, and if released to the public it would hopefully cost something similar to the original Robosapien when it first released, and hopefully do something purposeful too.

Please don’t get too attached to this robot though; mRobo looks like he could be the first prototype for a line of real-life Transformers, preparing to enslave the Earth population.  While us humans are looking at him and laughing at his dancing, he’s probably scanning everyones face for when he returns.