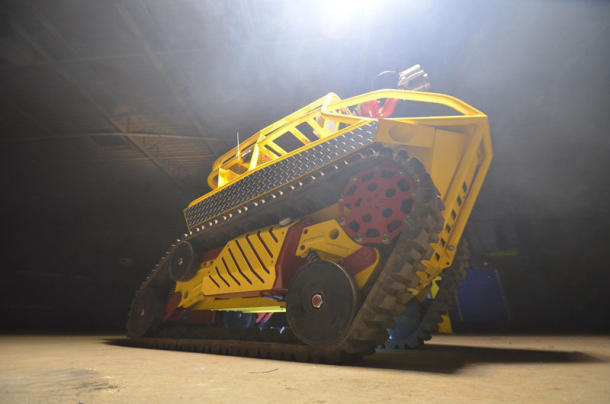 The life of a firefighter can be awfully dangerous. Firefighters often put themselves in situations that are extremely risky, but there are times when the situation is just to dangerous for human life to enter.

What do you do in a case like this? You bring in the robots. A new firefighter robot is designed for remote-controlling and can be controlled from up to a quarter of a mile away. The robot is designed to spray a high-pressure firefighting hose, without putting additional human life at risk. They are also small enough that they can get into tight spaces that normally would be off limits to the crew.

The remote controlled robot is made by Thermite, which claims it is the first robot designed to save lives. Its caterpillar tracks also are able to let it get across rugged terrain, including failing debris in buildings.

Even though it is a relatively small robot, that doesn’t stop it from being extraordinarily useful. The firefighter bot can even drag weights of up to 1,270 pounds. The robot is very sturdy, thanks to its aircraft grade aluminum and steel body.

This is an awesome development because it can put fires out without the risk of bringing in firefighters. As technology and robots advance, their may eventually be a time when we no longer have to worry about deploying human heroes in these situations. This will not only save lives but won’t put so many people at risk.