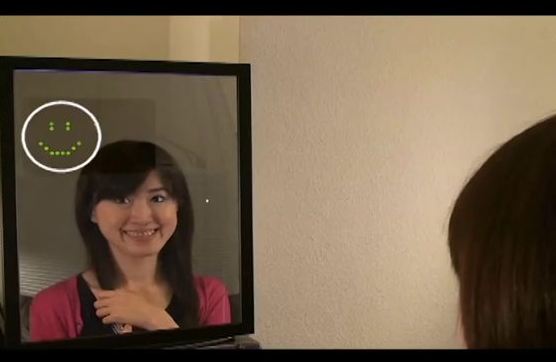 Let’s face it, some pretty crazy stuff comes out of Japan, but this has to be the weirdest thing we’ve heard in a while. Scientists at the University of Tokyo Sony computer science labs have created a Happiness Counter that measures your smile. Okay, it doesn’t sound THAT crazy. The science behind it is that the more you smile the better you fill, which has at least a little merit to it.

That being said… the video released for it is nothing sort of creepy. Apparently the smile counter will force you to smile or it won’t let you eat. The counter can be attached to a normal refrigerator and forces a person to smile. Depending on the level of smile, the door to get to your snacks and food will either be easy – for a good smile – or very hard, those that refuse to comply with a decent smile.

The smile counter dings if you smile and also display an LED smiley face. If you look sad around it, it isn’t happy either and it frowns. Yep, computers can make you do things. This is how the robot invasion starts after all. I swore it would be the cheetah robots that did us in— but this is scarier.

In theory, cool idea, even if a bit odd. Still, I can’t see this really being used. Who would pay for this? Maybe physcologists could use this by giving it to patients with depression?

Anyhow, check out the video below and let us know what you think.