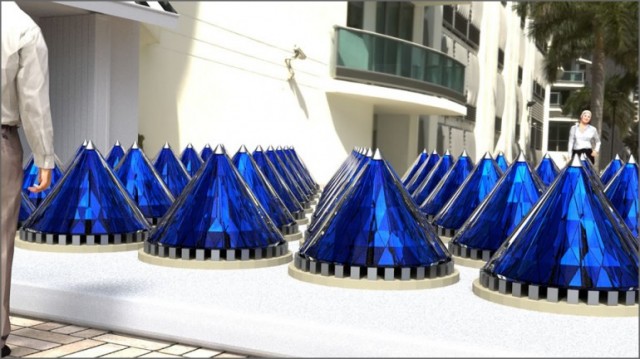 Solar technology has certainly come a long ways in recent times. What was once bulky and expensive has become much more practical. Solar is continually finding its way into more homes and businesses. The reasons are varied, for some it is about saving the planet. Others simply need to save money, or are in an area where traditional electricity is hard to come by.

Even if solar technology is becoming more common, it’s overall design hasn’t changed that much. Most solar systems are still flat panels, after all. What if a solar cell could be made to rotate with the sun to gather direct sunlight and produce great electric output? That’s what the V3Solar cone-shaped cells are all about.

This new type of solar technology can gather more sunlight for longer periods of time during the day and give up to 20 times greater electrical output. The cone system is called a V3 Spin Cell and is made of PV cells and a static out lens concentrator. The angle of the cone-shaped cells is what allows them to produce more energy more effectively. V3Solar says they position them at a 56 percent angle to the sun.

Not only do these things have better energy output, they have an awesome futuristic look that is much more aesthetically appealing than a traditional solar panel. V3Solar hasn’t released information about how costly these will be or how easy they will be to get a hold of, but they certainly have the potential to change how people look at solar technology going forward.