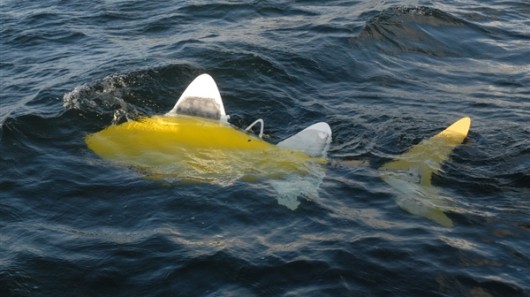 Recently we wrote about a robotic fish that was designed to mimic the swimming capabilities of a tuna, and could be used for spying and other government-related purposes. Now we have another robot fish, this one is aptly called the “Robo-Fish” prototype.

So what is this fish robot all about? Unlike the US-funded fish, the EU-funded Shoal Consortium project hopes to use the fish to monitor oxygen levels and salinity in waters north of Spain. Basically, if it proves to work correctly, these fish could eventually be sent out in teams that would patrol ports, harbors and other bodies of water looking for signs of pollution along the way.

Currently, pollution testing relies on collecting samples by divers that are than transported to a lab by for testing. This new system is designed to work on the fly, giving a real solution that can detect early signs of pollutions and react to them accordingly.

Besides its special sensors for pollution monitoring, the prototype also has an interchangeable sensor unit for detecting other chemicals and metals like lead and copper. Other technology includes the use of a fine to propel the fish, inside of using propellers or thrusters to make their way through murky waters.

This is a great idea, and is a very proactive approach for dealing with pollution. What do you think?