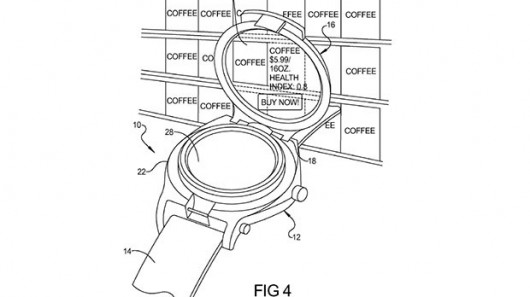 Google wants to surround your entire body with tons of computing devices, it seems. First we have the smartphone, which Google already controls through Android. Next we have the Project Glass computerized glasses. It’s not enough to have a computer in your pocket (your phone, duh) and a computer in your glasses, now they want your wrist, too.

A new patent from Google has surfaced for a smartwatch with a transparent, flip-up touchscreen. The screen would be used for notifications and other information transmitted from your smartphone- not unlike the many other smart watches already on the market. Of course Google isn’t going to make something without putting a new spin on it. Unlike many other watches, the transparent flip out screen would give you access to full apps and would also allow you to look through it for augmented reality purposes.

In many ways the smart watch would act a lot like Google Glasses. Augmented reality functions would include letting the watch “see” objects around you. It would use this information to give you GPS-based instructions and directions based on landmarks that it detects.

The patent also describes putting the watch at objects and getting detailed, augmented information about them on the fly. Point to that brand new car you are considering at the lot and it will automatically bring up information about fair retail price and how cheap you can get it if you are willing to haggle, for instance.

What do you think, would you want to consider a smartwatch with similar functionality and abilities to Project Glass?