Com2us is one of my favorite developers, simply because they have a keen ability to create innovative new games for the Android platform, and Swing Shot is a clear example of their talent.

This review is for the Android version, but there is an iOS version available as well.

Swing Shot starts us off with a slightly mysterious animation, giving us an insight into the strange world of the game. We’re then taken straight into the action without so much as a sentence to explain the gameplay, and the reason for that is because it’s just so simple.

The first level of Swing Shot simply shows us a directional arrow to describe the gesture we need to use to fling various kinds of bullets at our enemies on the other side of the screen. In all likelihoods, you’ve probably played Angry Birds by now, so flinging objects across your device screen should come naturally to you, and much like Angry Birds, a good aim and a well-placed trajectory are key for being successful in Swing Shot. 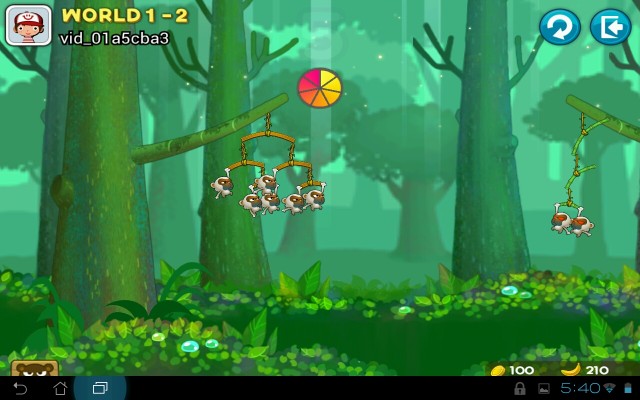 In Swing Shot, you’ll be given a bunch of animals that precariously dangle off a large branch of a tree located in a dark forest, and conveniently for our pleasure, each level will feature another group of enemies not too far away also dangling from a tree branch, facing our direction.

The aim of the game, if you’ve not guessed already, is to knock your opponent’s creatures off of the branches they cling to before they kill off yours. At first it seems like an easy task, but as your opponent flings rocks and other projectiles at you, your family of animals will start rocking back and forth from the impact of the incoming attacks, making it progressively more difficult to make a clear shot at the opposing side. 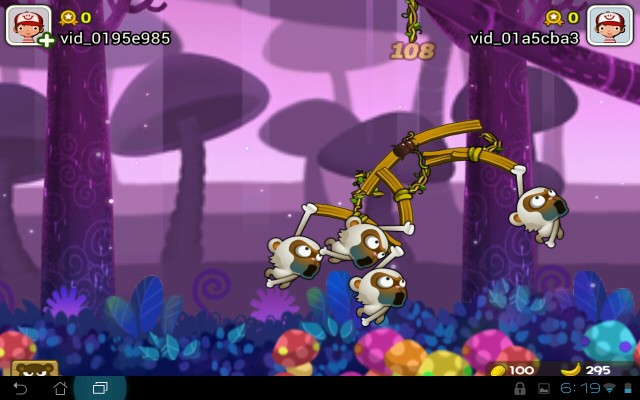 So, although the game controls could never be easier, they have been implemented in an environment that can be very tricky, and it will take a lot of patience and skill to hit your target as both your branches swing back and forth.

One thing to note about the controls is the problem in-game when choosing an animal to aim with. All your animals are usually bundled up quite close to each other, meaning it can be a difficult task to tap the animal you were hoping to use. This can be incredibly frustrating later in the game when you have equipped yourself with different animals with varied weapon types.

Arcade mode features a group of levels that start off simple and are easy to complete, but then become progressively harder. Upon completing an arcade mode level, you’ll be rewarded a rank from C-S, and will be awarded an amount of bananas depending on your level of success. You’ll notice many of the levels are similar to one another in that they follow a similar level structure, such as the standard sub-branch design shown in above images, and other themes such as animals attached to floating balloons, that will rise higher each turn. 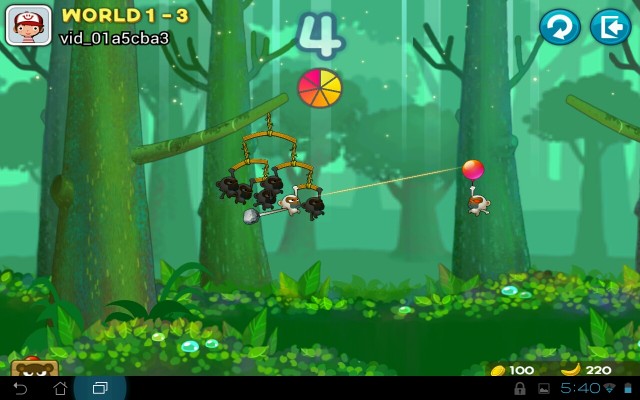 Although you’ll see a repetitive pattern throughout arcade mode, there is enough variety between levels to create a challenging experience and a well-balanced difficulty curve. Arcade mode has 48 levels split into four different worlds, each with their own background.

Versus mode pits you against another human, allowing you to test your skills against other players, whether they are your friend, or anyone else you may encounter by pressing the quick mode button. Gameplay follows a turn-based system, switching between you and your opponent, allowing a fair Player-versus-player experience.

You’ll be given 10 seconds to aim and take fire at your opponent, and will then watch your opponent fire back whilst they take aim within their 10 second window. As you play through versus mode, you’ll earn experience and bananas whether you win or lose the game. The experience goes towards your rank, which along with your win/loss ratio, will determine who you play against in quick mode, allowing a fair fight between players.

Unlike arcade mode, the amount of bananas you can earn is limitless; in arcade mode you can only earn a maximum of 12 bananas per level, but versus mode allows you to play as many battles as you’d like. 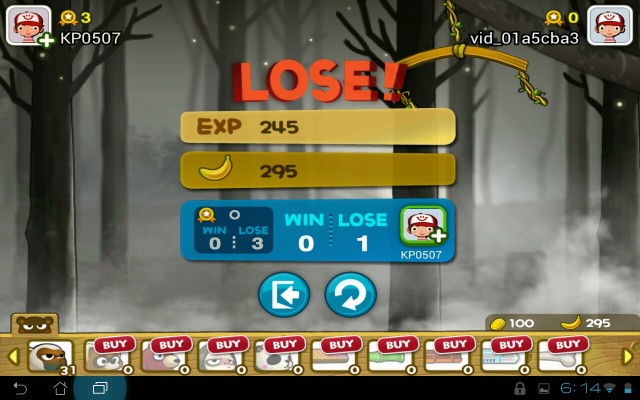 There are three types of VS mode to mix things up a little, and although the core gameplay doesn’t change, there are a few differences to how each mode works. I’ll leave it to you to find out what each game mode has to offer.

You might have noticed that this review has mentioned the possibility of earning bananas in Swing Shot quite often, and without something to spend them on, it’d be virtually pointless, so it’s good to know that there is an in-game shop available from the main menu as well as in mid-battle too.

The shop consists of a few items that offer different methods of play. The two most important items available to buy are different animals and branches, both giving the player new offensive and defensive buffs. Each animal uses a different weapon dedicated to different types of damage, whilst each branch type also has varied strengths and weaknesses against the weapon types available. A good player will be able to construct a varied family of animals to be able to bring down whatever their opponents may throw at them. 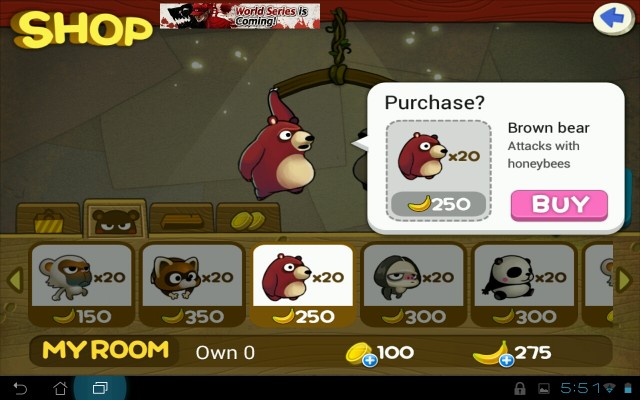 It’s important to note that bananas will only buy you a limited number of animals, and this is where in-app purchases come into the scene to help players add more convenience to the game.

The graphics in Swing Shot are very cartoony, and Com2Us have done a wonderful job at creating easily recognizable assets in the game, such as the varied character graphics and backgrounds. The music heard throughout the game is both playful and easy on the ears, and along with the audio sounds made by the animals whilst in battle, Swing Shot makes for an enjoyable and humorous mobile game.