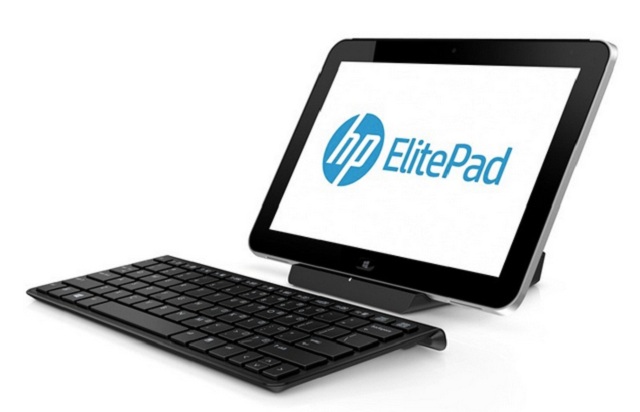 Windows 8 tablets and computers are certainly getting alot of attention – both positive and negative – with their impending launch. While many Windows 8/RT tablets are focusing on the average consumer, HP is releasing the ElitePad 900 for businesses that aren’t afraid of the change that is coming with Windows 8 and its new Modern UI (previously called Metro).

The new tablet is scheduled for release in January of next year and offers a reasonable amount of power- for an Atom-based processor, anyhow. The 10-inch slate has a 1280×800 IPS display with Gorilla Glass, is 9.2mm thick and weighs just 1.5 pounds. The battery life is expected to last about 10 hours and it is powered by an ATOM processor with 2GB of RAM. There will be a 32GB and 64GB storage version, as well as microSD card slot for expansion. The new business tablet will even support 3G and 4G SIM cards for those that need mobile broadband. The ElitePad 900 also features an 8MP camera on the back and a video call camera with an 1080p resolution on the front.

What makes it business-worthy? The ElitePad is designed with a range of adapters for its proprietary connector that include an SD reader, full USB, Ethernet, line out, VGA and even HDMI. The proprietary connector also will work with a special dock that can be paired with a wireless keyboard to provide a full PC-like experience with compatiblity for all existing Windows applications and drivers that will run with a lower-end Atom processor.

That’s not all that is in store for the ElitePad. A new Smart Jacket technology also works as a case that adds extra features including a clamshell-style model that basically turns it into a fully functioning laptop. What do you think of HP’s attempt at making a unique tablet hybrid with businesses in mind? Personally, I’m excited and curious to see what kind of pricing this brings. It will also be interesting to see how this does against Microsoft’s own Surface tablet.