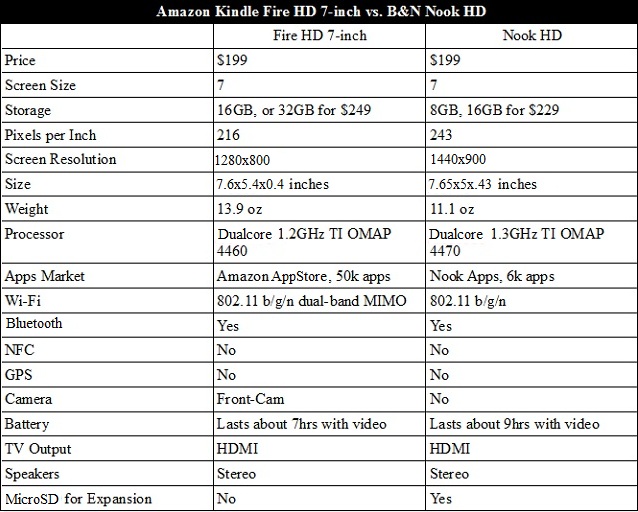 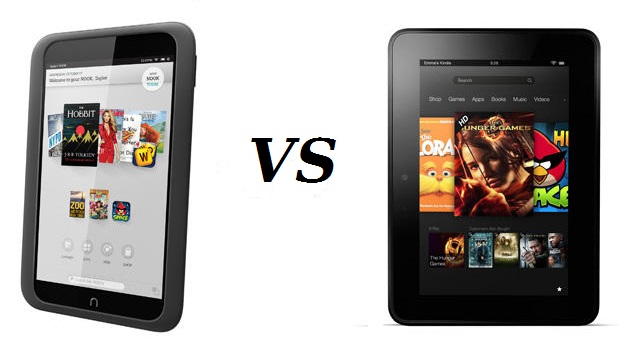 Things keep getting better in the 7-inch tablet market. First we had the release of Google’s Nexus 7 earlier this year, giving us a near vanilla Android experience. Next, we had a worthy successor to the popular Kindle Fire in the form of the Fire HD 7-inch and 8.9-inch models. Yesterday we received word that Nook was going the club with an improvement to its Nook Tablet line.

When it comes to B&N tablets, they essentially have proven to be nothing more than e-readers with a few extra tweaks. The Nook Tablet was a major step up from the single-core Nook Color, but it still lacked the level of content of the Kindle Fire. With the announcement of a new Nook Video service and the Nook HD and HD+, B&N just brought their game to the next level.

So how does the Nook HD stand up against the 7-inch Kindle Fire? Take a look at the table below to get an idea:

As you can see, the two 7-inch versions are actually quite evenly matched. In some ways, the Nook is faster and has a few key items like MicroSD. At the same time, the Nook lacks a camera and has considerably fewer apps through its own store.

If you care about having a large selection of apps, the Amazon Kindle Fire HD is clearly the winner. It’s also worth noting that its video service is much more established than the up-and-coming Nook Video offering. Content is often key in the decision of what tablet to get, and the Fire HD is hard to beat here. If app selection is your only concern, the Nexus 7 might be an even better option, since it has access to the 675,000+ Google Play apps for Android.

What do you think? Would you rather have a Nook HD or a Kindle Fire HD 7-inch model?