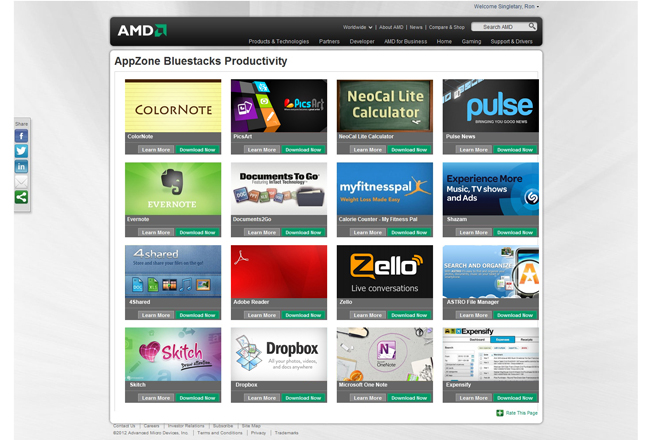 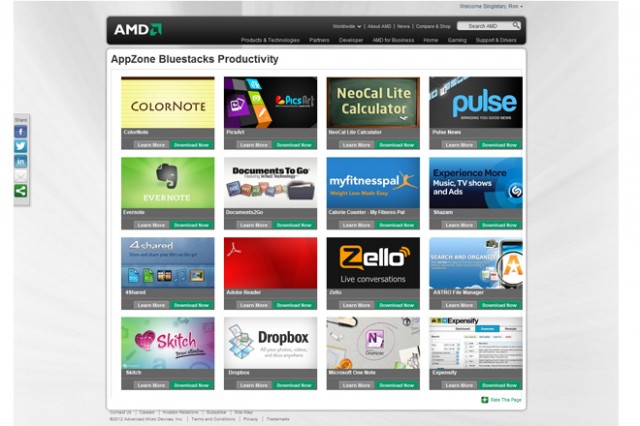 Windows 8 is almost here. If you are considering a Windows-based tablet, there is really only one area that is still a bit of a concern, apps. Right now, Microsoft currently has managed to gather 2000 apps before the launch of their new touch-oriented operating system, but that is pretty puny when compared to the 600,000+ that exist on iOS and Android. What do you do if you want more apps but are interested in Windows? Bluestacks is the answer.

Through the power of BlueStacks you can have access to many existing Android apps, from games to productivity apps. While anyone can download the standard app for an Intel tablet, AMD is partnering with BlueStacks to create the preloaded AMD AppZone Player. The software will bring 500,000 mobile Android apps to Windows and is highly optimized for AMD’s GPU and APU technology.

This is a great way for AMD to offer a “one-up” on Intel in the tablet arena, but really it is just as easy for Intel tablets to download the BlueStacks app and install it themselves. It is also still unclear about how seemless Android apps will work with Windows 8. Will they use the new touch-UI or only be accessible through the desktop? These questions still remain unanswered.

For those that are somewhat interested in Windows on a tablet, does the idea of the AppZone Player make you interested in considering an AMD option? If not, are more interested in Intel or an ARM-based Windows offering?