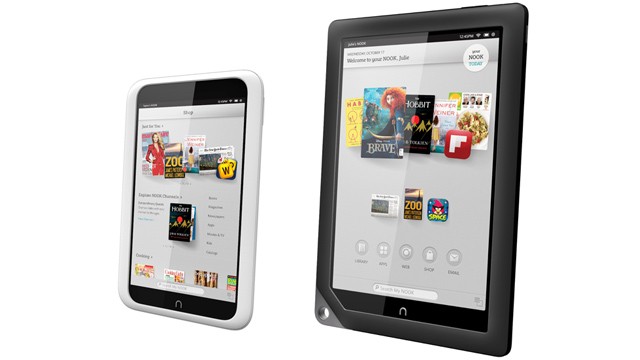 Barnes & Noble has yet to truly excite us with their tablet offerings, but this might finally be changing. Today they announced a brand new set of tablets, the Nook HD and HD+. There is a 7-inch model with 8GB of storage for $199, and 9-inch Nook HD+ model with 32GB of storage for $299.

Is the new line a worthwhile upgrade from the Nook tablet and Nook Color? Absolutely. The Nook Tablet has a 1024×600 resolution, the HD line has a 1440×900. Other changes include Android 4.0 as the basis, not Android 2.3. Not enough of a reason? How about a dual-core 1.3GHz (HD) or 1.5Ghz dual-core processor (HD+), as opposed to the slightly slower 1GHz dual-core in the Nook Tablet? All around, this is a worthwhile upgrade. The screen is crisper, the graphics are better. The Nook Color is nothing more than a color e-reader with a few apps, the Nook Tablet is slightly above that in capability. The Nook HD and HD+ are both in an entirely different league than any of B&N’s previous offerings.

The new tablets look pretty good, and with a new “Nook Video” service coming this fall, there are more reasons to own a Nook HD tablet than ever before. Are the changes enough to truly set them apart from the Kindle Fire HD and the Nexus 7? Yes and no, but we’ll take a look at that in another upcoming post.