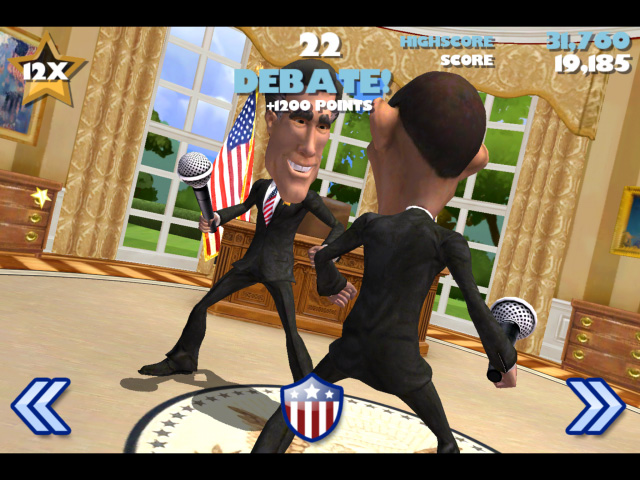 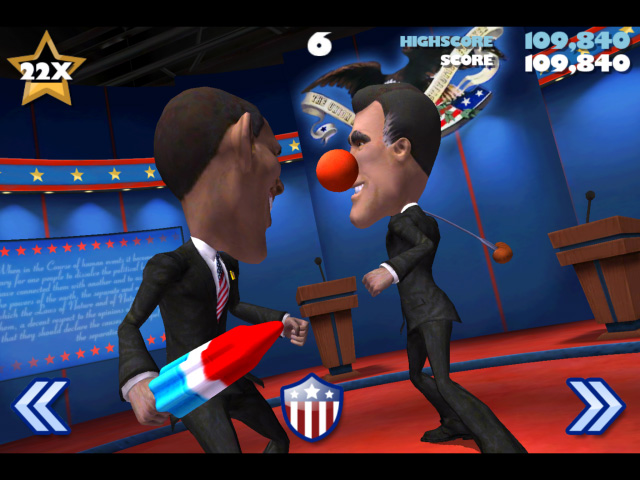 Vote!!!, is Epic Games’s hilarious presidential candidate version of Infinity Blade.  The game play is very similar,  the difference between Vote!!! and Infinity Blade is that, rather than playing as a knight, you play as either Mitt Romney or Barack Obama.  What is more satisfying than watching Obama in a super hero costume beating up on someone with a Rubber Chicken?  Rhetorical question,  nothing is.

The controls follow the same formula as infinity blade, slash the screen in any direction to attack.  There are two dodge buttons in the lower left and right corners and a block button in the middle.  Hold block to continue blocking, press dodge to either dodge left or right.  In the top left corner there is a star with a multiplier inside of it, this multiplier builds up every time you perform a successful attack, rebuttal, block, or dodge.  The multiplier resets when you get attacked.

Every attack landed gives points and the object of the game is to earn as much points as possible within the time limit.  A rebuttal is performed by attacking the weapon the opponent is using to parry it in the other direction.  Vote!!! has a system where every time you unlock a new achievement,  your multiplier increases by 1 at the beginning of each game for each achievement unlocked.  Some of them were quite difficult to get, such as the don’t get hit a single time in a match.  Others were easy, like getting ten rebuttals in one match.  There are enough of them to keep you playing the game for quite a while and there are even extra items and perks to be unlocked as well.

The items and perks are unlocked using coins earned in each “debate”, as the game likes to call its fights.  Coins are earned in game,  every once in a while the opponent will move in slow motion and there will be icons on his body where you are supposed to tap to gain coins.  Do it quickly though or you might get scissor kicked, yes, scissor kicked.  Some of the attacks in this game are outright ridiculous.  Ever seen Mitt Romney do a backflip? 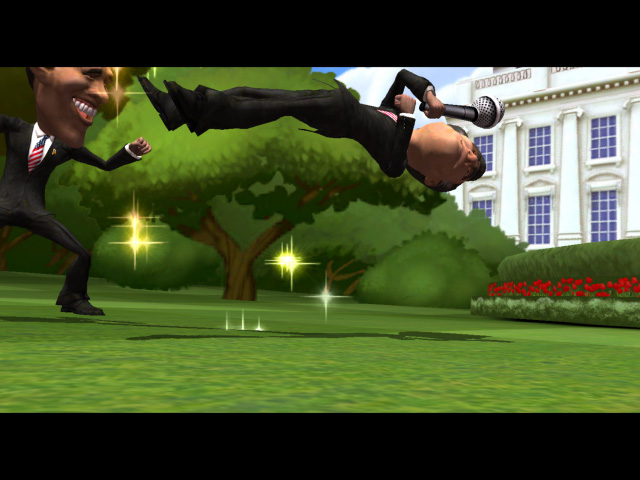 Thanks to Vote!!! now you can.  Items in Vote!!! are ridiculous as well, weapons ranging from a rubber chicken, to the constitution to a liberty Saber.  There is a multitude of hats and outfits as well.  Super President Obama is hilarious. Perks are included as well, Health Care, Super Pac and Filibuster are all there.  Each one of these makes it easier for you to score higher each debate.

Vote!!! runs on the Unreal Engine 3, so you know the graphics will be nice and smooth.  They are simple, but the little details are nice.  Sparks and red white and blue stripes and stars fly out of your weapon when you attack and there are four different stages where the candidates may debate.  Although I don’t think I have ever witnessed a debate on the White House lawn before.

The patriotic music in the background is quite fun to listen to and each candidate has silly things they say.  Such as Obama’s “I’m going to beat you with change”

Vote!!! is a hilarious game with tons of replay value great unlockables and enough challenge to keep you going until the real election. Just like Infinity Blade I can’t think of anything really that wrong or bad with this game.  Did I mention it is free? Pick up Vote!!!  in the app store