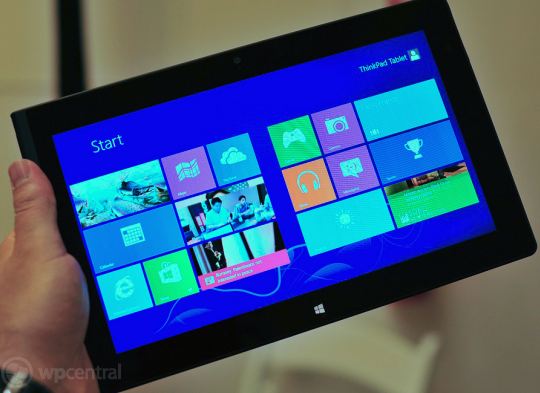 What you see here is the Lenovo ThinkPad 2. It’s a Windows 8 tablet that will ship with a full QWERTY keyboard, giving you a laptop-like experience when you need it. And it’s going to sell for $799. This was formally revealed at PepCom in New York City where the Lenovo rep said that the ThinkPad 2 would indeed sell for that price when it launched on October 26.

Remember that this isn’t “just” a tablet. Realistically, it’s probably closer to being a really thin ultrabook with a touchscreen, thanks to the Intel processor under the hood. It gets Windows 8 Pro, a 1366×768 IPS display, 10 hour battery life, dual cameras (2MP + 8MP), AT&T-compatible LTE, NFC, USB ports, and a stylus. The $799 price also includes the full Microsoft Office 2013 suite, but I hear that the keyboard doesn’t have an “extra” battery like what you get with Asus Transformer Pad series.

$800 might sound like a lot of money for a tablet, but when you consider that most ultrabooks start at around this range, this doesn’t so far out there. That said, it’s rumored to have just an Atom “Clover Trail” chip rather than something from the Core i3/i5/i7 series, so your performance could be significantly hindered. What do you think? Would you buy it at $800?