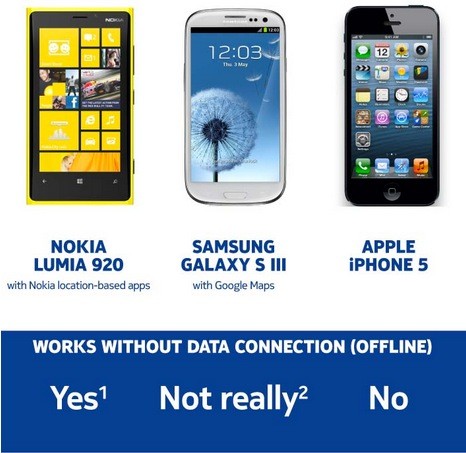 Nokia is taking the time out of it’s busy schedule to do a bit of gloating. With Apple experiencing some pretty serious mapping issues with iOS 6’s new Apple map program, Nokia’s blog posted some comments that were thinly veiled attacks on Apple, and to lesser extent, Google.

Here’s the exact words from Nokia:

“Unlike our competitors, which are financing their location assets with advertising or licensing mapping content from third parties, we completely own, build and distribute mapping content, platform and apps. In other words, we truly understand that maps and location-based apps must be accurate, provide the best quality and be accessible basically anywhere. That’s been standard practice at Nokia for the past six years, and we also understand that ‘pretty’ isn’t enough.”

For those that don’t know, Apple has been heavily criticized recently for its Map program’s major mistakes. These mistakes include placing towns in the wrong directions, have incorrect names for locations and even duplicated islands present.

The comments mention all competitors, but really is aimed at Apple. When you stop to look at Google Maps, they clearly have a strong offering. Is Nokia’s mapping solution the best out of the three, though? Honestly, yes it probably is. The company has long been committed to creating great maps and so Nokia’s boasting isn’t necessarily undeserved.It’s also worth noting that Nokia’s map solution has a great offline viewing option, while Apple doesn’t offer this at all and Google is just now getting that feature off the ground.

What do you think of Nokia maps in comparison to Google Maps?