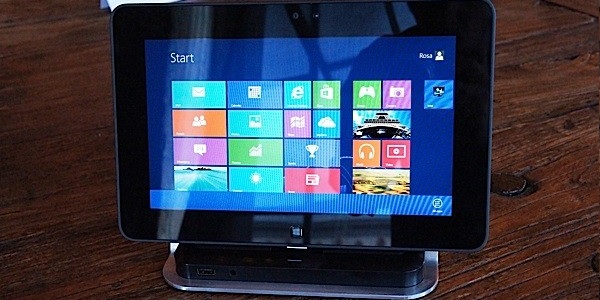 Windows 8 is almost here, and that inevitably means plenty of new Windows 8 tablets, laptops and desktops in the near future- including Microsoft’s own Surface tablet. Another interesting looking offering is the new Dell Latitude 10 tablet. This 10.1-inch touchscreen tablet has a 1366×768 pixel resolution, is protected by Gorilla Glass and has a massive 128GB SSD, 2GB of RAM and a SD card slot.

The beefy new Latitude 10 also has dual cameras with HD on the front and a rear facing 8MP cam. Other standard stuff is microUSB for charging, USB 2.0, HDMI and audio out. Unlike most tablets though, Dell’s new Intel-driven tablet also has an Ethernet port. In today’s wireless driven world, this might not be necessary, but it’s still a nice extra.

So why would you consider something like this over a premium Android tablet or iPad? The biggest reason is that you care about Windows-compatible apps.

While ARM-based Windows tablets won’t run old-school Windows programs, Intel-based devices like the Latitude 10 will. This is probably most important in the business world where you need custom in-house applications and programs that are designed around Windows. This gives you an easy way to access them in tablet form without re-writing company programs for Android or iOS.

It’s also worth noting that this Dell tablet features a dock that basically turns it into a full all-in-one PC. All you need is a keyboard and mouse added. This means that you will be able to fully do all the things you could do with a low-to-mid range desktop or laptop.

So why wouldn’t you get one of these things? Either you don’t care about Windows compatibility or you don’t want to pay $1000+ for a tablet. Simple as that. Is $1000+ too much to ask for the Latitude 10? Depends on how you look at it. In a way you are getting a full PC and a tablet in one, thanks to the Intel processor and Windows compatibility. Looking at it that way, it’s a pretty decent value for those that want something that can serve dual purposes.

No official word on pricing yet, but a $1000+ price tag is more than likely. As for release, Dell says it will arrive around the same time as Windows 8. This means it will hit the market in a month or so. What do you think, interested?