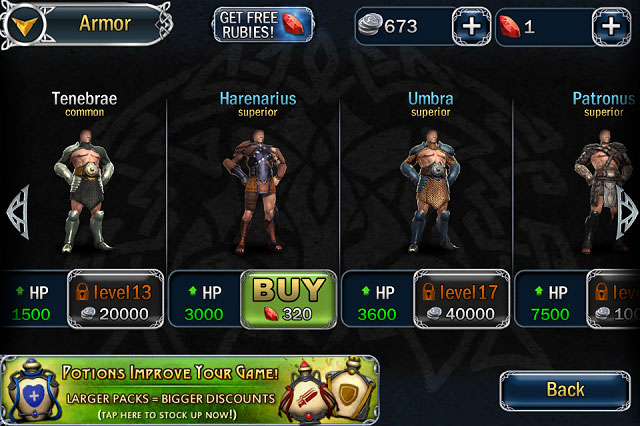 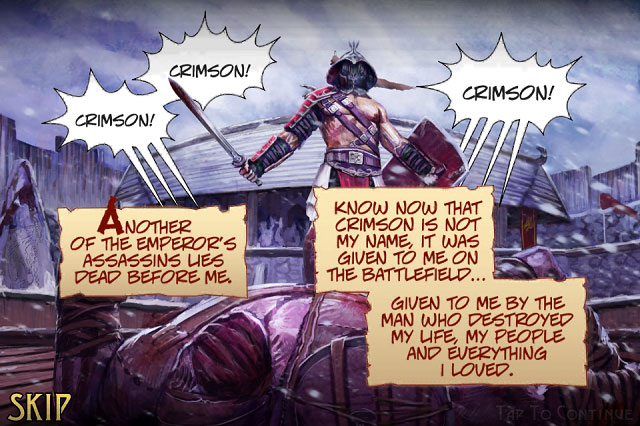 Reminiscent of 300 and Gladiator, Blood and Glory Legend on iOS makes you feel like you are in the center of a gladiator arena.  It’s Glu Mobile’s newest game, and while it is free, expect to feel the temptation of the alluring micro-transactions.

The biggest difference between Legend and the first Blood and Glory game is the addition of a storyline. You are the gladiator, battling through the arena to reach and defeat the Emperor in battle. Follow the story with stylized comic strips between each tournament. 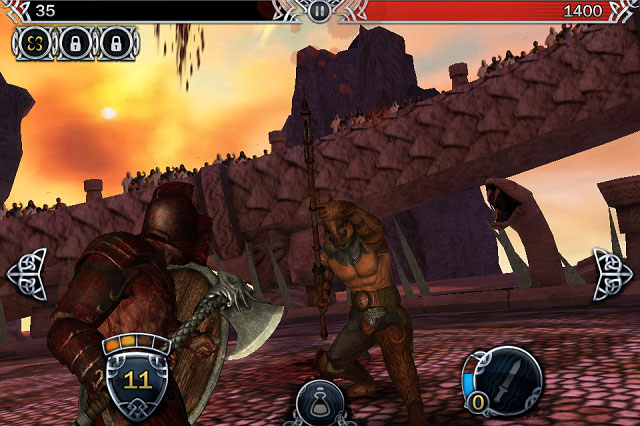 Defeat each enemy with swipes and taps using well-timed potions and attack combos. One of the keys to winning a battle is knowing when to block, parry or dodge attacks because you have a limited amount of blocks. The opponents are not target dummies; each has strategies of their own that you must learn to defeat them. Thankfully, the response time in-game of your taps and swipes is very accurate, so do not worry when you decide to block last minute rather than dodge.

At the end of each winning battle, you gain coins and experience that increases your level and your ability to purchase items from the store. Coins and rubies are used to purchase gear. Rubies are the hardest currency to obtain; you can only get them via daily bonuses, free offers or buying with real money. With each level you gain skill points which you use to increase your attack, block and health points.

The difficulty of the game increases exponentially around the fourth to fifth tournament. This is where I started to use up all of my resources and even used some of the free offers (such as “liking” Glu Mobile on Facebook) to get more rubies. Sadly, however, your opponents’ health is way higher and they are much stronger; you are no longer earning enough experience of currency to keep up. While it is possible to defeat the game without spending money, it would require daily dedication to acquire the daily bonuses and repeatedly defeating enemies you already defeated. 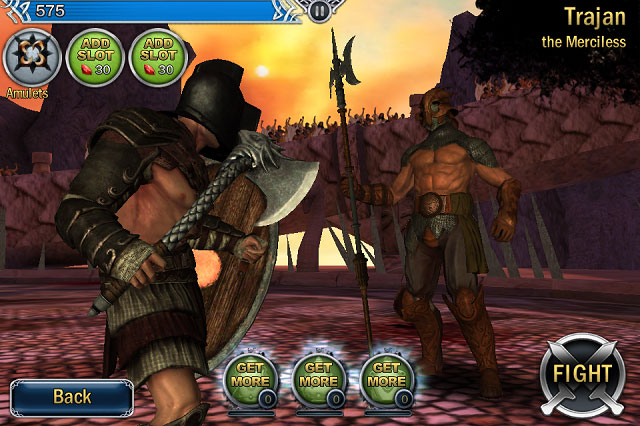 One of the main draws to Blood  Glory Legend is the astounding graphics. The detailed textures are clearly seen in high resolution on an iPhone. The fluidity of movement in your gladiator and the opponent bring you closer to the battle. To top it all off, the battle music and cheers of the crowd makes you feel like you are in the center of the arena.

Overall, the game is great to look at and fun. I was tempted on more than one occasion to buy currency with real money, which is a testament to how drawn in you become in Blood and Glory Legend. I understand that the game is great for a free game, and the developer needs to finance the game and future games, the feeling like you have to use real money to progress cannot be ignored.

Download Blood and Glory Legend here for your iOS device.