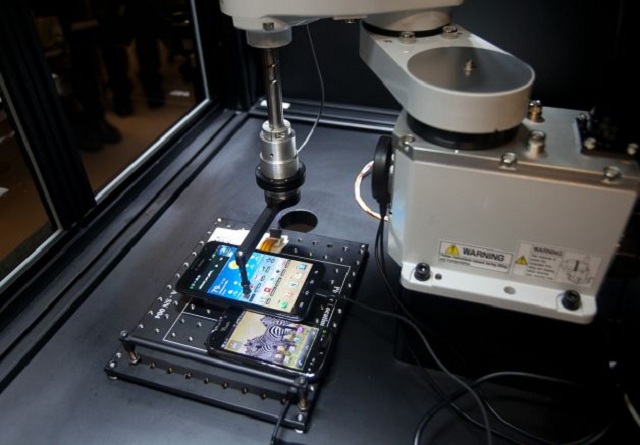 When it comes to phone returns, more than half the time it is because of faulty software, at least that is what T-Mobile claims. What’s a mobile carrier to do about it? At T-Mobile the solution is to employ robots.

The “Tappy” robot is a custom-built phone sofware tester, and is the first automated testing robot used by a mobile carrier. The Tappy robot has actually been in service for five years now, but apparently is just now officially being unveiled to the public.

When it comes to phone testing, T-Mobile runs its devices for 24 hours straight while executing hundreds of tasks. In order to make the cut, they need to have no stalls, freezes or other glitches along the way. Tappy is designed to navigate the screen and open apps in a way similar to an average user.

Using an overhead camera, human researchers at T-Mobile can also keep an eye on all devices being tested and help catch bugs before they ship out to customers.

The robot has several different usage scenarios programmed, can test the keyboard, UI speeds, battery life, voice calls, gaming texts and much more. With Tappy, a week’s worth of testing can essentially be completed in just 24 hours, according to T-Mobile.

In the years that Tappy has been at work at T-Mobile, the company says they’ve reduced device return costs by 75 percent.

You can check out the video below to see Tappy in action.