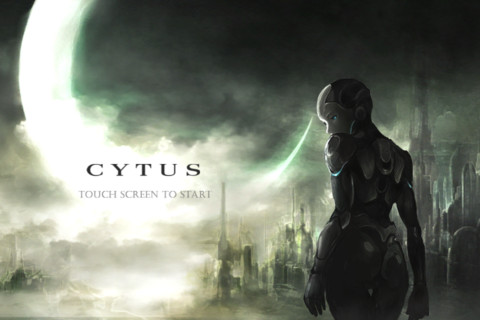 Years ago I used to play a game called Osu; a very popular music game where the player clicked bubbles to the music as directed by the game.  Cytus, is very much like Osu in that it has much of the same music genres and an almost identical gameplay.  Cytus also sports a very simplistic design and a wonderful soundtrack, which is what got me interested.

Cytus is played by tapping colorful bubbles in rhythm with the music playing.  There are bubbles the player must simply tap, bubbles that have to be held down, and bubbles that have to be dragged a certain direction on the screen.  A black bar moves up and down the screen and goes through the bubbles. When the bar hits the center of the bubble, the player is supposed to tap that bubble.  Most of the hits that gave me a “perfect”  were spot on,  but the difference between perfect and good is quite large as well as the difference between good and bad.  A miss, is where the player misses the bubble entirely.  This rarely happened to me since I had honed my skills previously with Osu.

Game play gets progressively difficult through the twenty eight levels.  Each level has an easy mode and a hard mode,  of course easy mode is very easy in the beginning.  On the other hand some of the later songs on hard mode are carpal tunnel inducing.  The game play is very simple and fun and it works well. 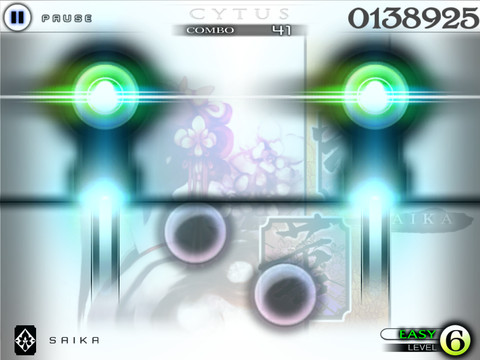 Cytus has extremely simplistic graphics along with the gameplay.  There is beauty in the simplicity though,  everything works together with no lag or outstanding problems.  The backgrounds could use some work though.  Thy are very faint and simply show a picture rather than a moving animation, like those of Dance Dance Revolution.

I knew Cytus was going to have me playing for a while when I tapped on the main menu screen; the music was fantastic.  And this is where Cytus outshines other rhythm based games. The variety is excellent.  There is a multitude of genres packed into the game:  J-pop, J rock, synth pop, Techno and Trance are all heard in this audio feast.  Each song sounds completely different from the others.  The selection is nice too,  28 different songs, which is far more than most music games in the app store.

Each song took me multiple tries to beat it with a good score.  Cytus has quite a bit of replayability.  The developers at Rayark have promised to release a new pack of ten songs with every 100,000 downloads as well, meaning Cytus could potentially have over one hundred songs in good time. 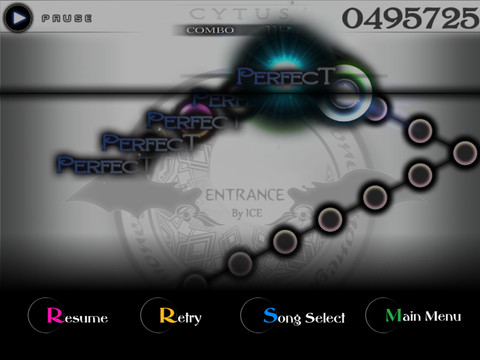 Cytus is an excellent music and rhythm game,  it is easily in my top five for music games found in the app store.  The variety of music genres and super simple gameplay really make this an excellent buy.  While the graphics are not the best, the game play and song selection more than make up for it.  Cytus is a fantastic music game despite its minor flaws.