Exorcist 3D Fantasy Shooter for Android is designed to be an action-heavy combat game, focusing on different waves of enemies. The concept of the gameplay is similar to Dungeon Hunter 3, and follows a freemium ‘free-to-play’ model.

From first glance, Exorcist looks like it has great potential, but as of now it’s far from it. The gameplay itself can be intriguing for a few minutes, with an integrated highscore system from Openfeint, and various items to buy in-game. But the controls break up the gameplay and ruin the experience; the controls are made like you’d expect, with a few hotkey buttons on the right, and a joystick on the left. Exorcist is no different, but what keeps it trailing behind others in a similar genre, is the poor responsiveness of the controls, and the terrible multitouch input. 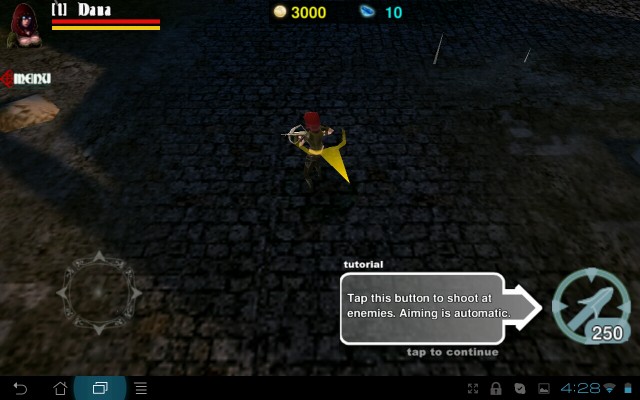 You’ll find yourself swerving uncontrollably every time you press the fire button, and sometimes the fire button won’t even work whilst you’re moving, or vice versa. These dodgy controls make it extremely difficult to play comfortably and because of the problems, you’re a lot better off just standing still and firing, especially when you get a huge accuracy bonus doing so…

Aside from the cringe worthy controls, the gameplay in a sense is not too bad. There is a good challenge curve to the game and waves will start to become more advanced, featuring different enemies with varied types of attack. The overhead view has been implemented nicely and it follows the character well. Sometimes monsters seem to get stuck behind obstacles, which can be a little annoying, but other than that, the game mechanics are smooth. 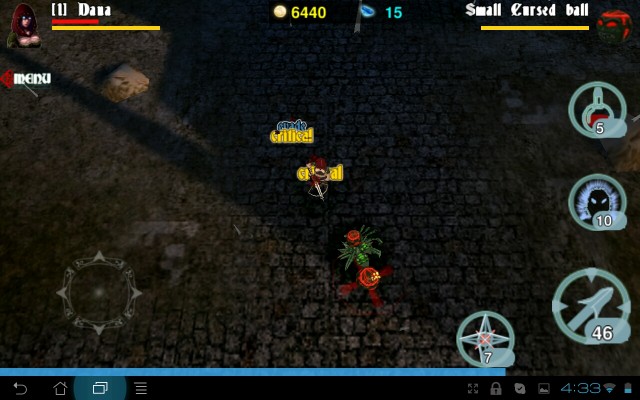 The audio track for this game features a set of songs from a French rock band known as Antarhes, and I think this is the first time I’ve seen an audio track for a smartphone game with such quality and quantity. To complement the great audio track, the graphics themselves are very impressive; the top down camera gives us a good viewing space, allowing us to spot the various enemies from a distance, and the five different levels have been designed to incorporate a large playing space, without making the map feel any less empty. The levels and creature models create quite a dark, gothic playing space, and the character model adds to that vibe too.

In the shop menu the character graphics are a little pixelated, and the different items look almost identical, with a few extra polygons for the most expensive weapons, and different shaded clothing in the armor section, which leaves customization very minimal, and other than a largely overpriced snowman suit, there are no items to make your character dazzle in the otherwise dark environment. 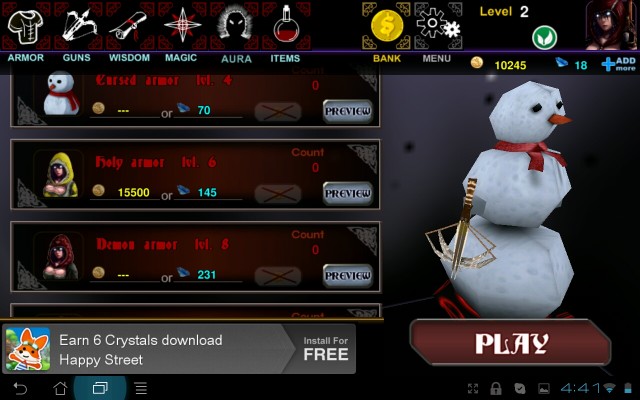 Surprisingly the control buttons look very primitive, and feature very little detail at all. Next to the 3D graphics, the control interface is a bit of a mocking, and it feels as if the work could be quickly done in Microsoft paint.