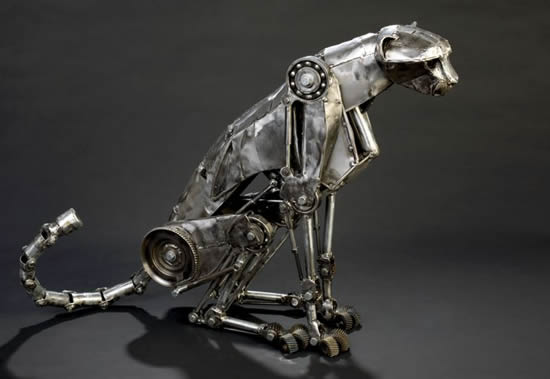 Not too long ago, Mobile Magazine reported on the world’s fastest land robot, the very creepy and strange DARPA Cheetah robot. At the time it’s recording-breaking robotic speed was set to 18MPH.

Good enough, right? The robotic speed record was broken, nothing left to do. Not exactly. It seems DARPA wasn’t content with 18MPH, and has continued to work on further developing the cheetah bot. The new land speed of this unique robot is 28.3mph for a 20-meter split.

To put it into comparison, we once commented that the cheetah robot couldn’t outpace Olympic Champion Usain Bolt- who manages sprint speeds around 23MPH. As you can see, now it can.

The robot is the works of Boston Dynamics, under DARPA’s Maximum Mobility and Manipulation program. Is there a practical reason for such a robot, or is it merely just to see how fast we can make a computerized system run? It’s probably a little bit for both reasons, but there are some potential applications for the cheetah robot.

The cheetah’s high speed could make it great for emergency response, military missions and other situations where there is a deep need for speed. The only issue is that many of these situations might involve rough terrain, something the robot isn’t designed for. In the near future, DARPA hopes to test a prototype model that is designed for natural terrain, though.

While they are at it, maybe they could make a prototype that makes the robot look less creepy (as seen in the video below), and more like the concept steampunk cheetah above? There is something unsettling about a headless robot running a muck at high-speeds.

Great, now those noodle robot Overlords have robotic pets that can hunt down any humans that attempt to escape their wraith. Check out the video of the record-breaking cheetah speed below.