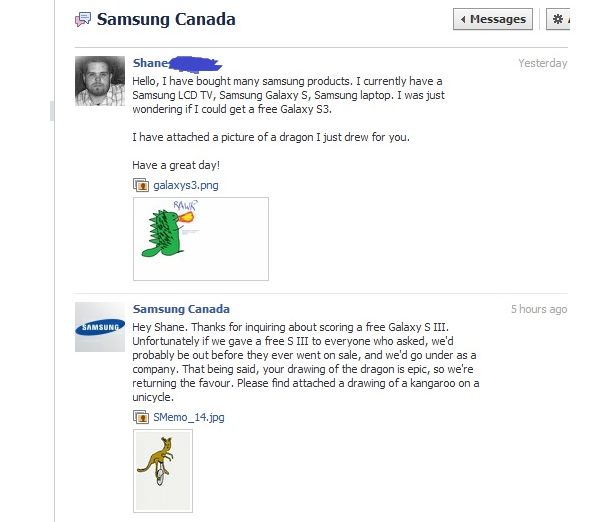 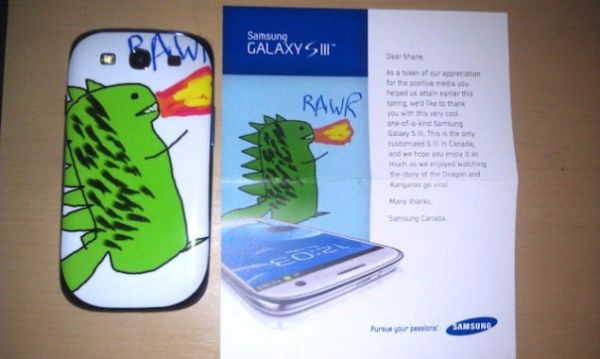 What happens when you playfully send a picture of a dragon to Samsung of Canada? You get a free custom phone, that’s what. Okay, don’t expect this same results, but for the very lucky Shane Bennett, this is essentially what transpired.

When Shane Bennett sent in the picture of the dragon as a gift while asking for a free phone (as a joke), via Facebook, Samsung said that they would be out of business pretty quickly if they sent free phones to everyone who requested it. They were kind enough to send him a picture of a kangaroo on a unicycle though.

Shane immediately took to Reddit, sharing the story of Samsung’s joke back at Shane’s half-serious inquiry for a free phone. As you can imagine, this created quite a bit of positive press for Samsung, at a time when they need it pretty badly- considering the recent lose against Apple in their legal war.

As you might have guessed, Samsung’s thank-you for Shane’s positive sharing about the Kangaroo and Dragon was in fact a free phone. Not just any phone though, one with a custom picture of the dragon that Shane drew, not to mention a custom dragon picture in the launcher as well.

Is there a chance that Shane Bennett’s ‘story’ is nothing more than an elaborate marketing campaign? It’s possible, but we’d like to think it’s totally legit, and it very well could be.

Generous act as a “Thank You” by Samsung or a pre-planned way to get positive attention to detract from its war with Apple?

If an Apple consumer asked for a free phone in such a joking matter, would they even get a response? What do you think?