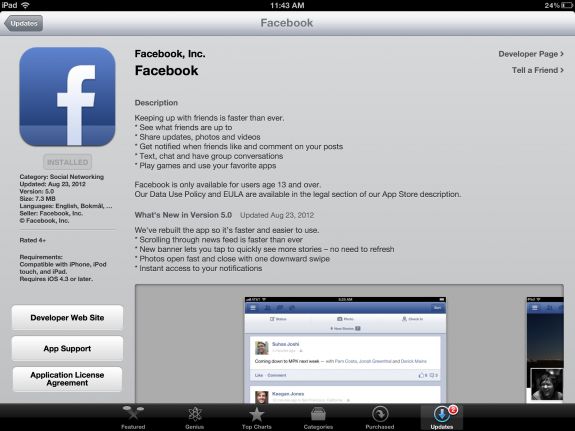 Facebook finally received a new update to its iOS app today. What’s new and is it much of an improvement over the last version? First, it has been totally rebuilt so its easier to use than ever, and faster, too. What else is improved? The scrolling through the news feed is also faster, there is a new banner for news stores, and photos open up fast and easy.

The bottom-line is that they have truly taken a less-than-great iOS app and turned it into something worthwhile. The update is also not particularly large, with Facebook 5.0 being just a 7.3MB download.

So why is this app so much faster than the previous version? Part of the reason might be because the new version was rebuilt using Objective-C, the language used for native iOS apps, while the prior version was built using the web-based HTML5.

The Android version has also received an update, but there isn’t nearly the same level of improvements heading to Android users. While the iOS app is now native, the Android version continues to make use of HTML5 and continues to have many of the same problems that the previous version of the iOS app did. For now, the iOS version of Facebook is now largely superior, but hopefully this will be rectified in the near future.