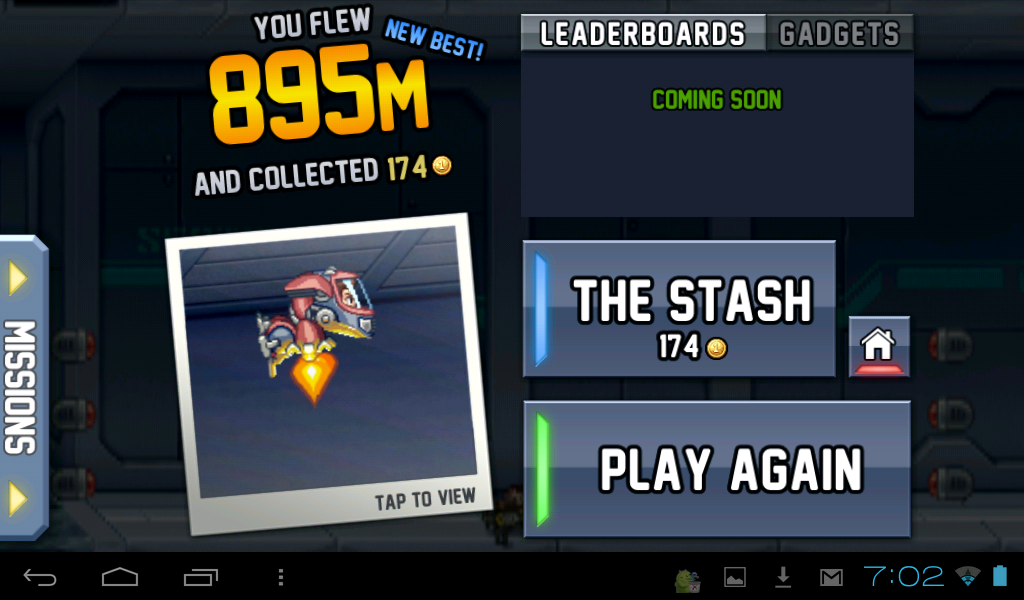 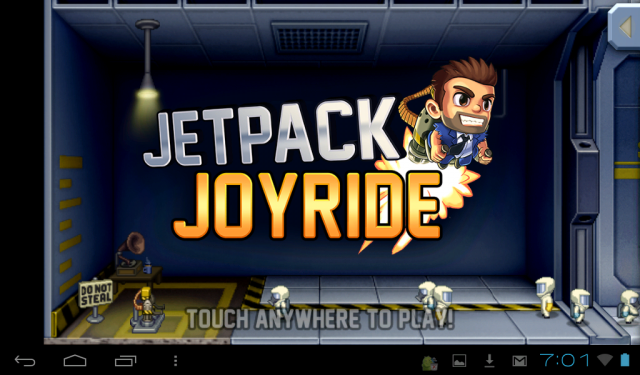 One of the most popular iOS games ever has finally made its way over to Android, Jetpack Joyride. This game is the work of Halfbrick Studios, the same folks that created Fruit Ninja. The idea is pretty simple, you command Barry Steakfries- a regular everyday Joe that decides to take a joyride through the factory using a bunch of top secret devices, such as the machine gun jetpack, and from there the chaos ensues.

While the story might not be that ‘epic’, this game is very addictive, to say the least. So does the Android version hold up to the original iOS game? Let’s take a look and find out. Keep in mind that this review might be geared towards the new Android release but should be largely applicable to iOS users as well. 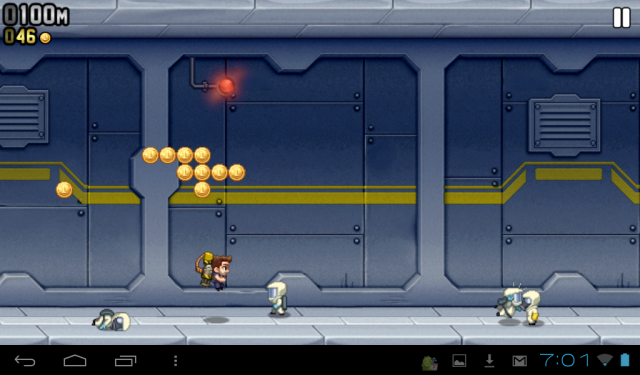 Gameplay with Jetpack Joyride is extremely easy to learn, all you do is have to tap on the screen, it doesn’t matter where, Barry will do the rest. That might not sound exactly exciting, but don’t be misled, the obstacles that you have to block as Barry makes his way to the factory are very complex and requires quick responses and thinking if you want to keep from being knocked off the jetpack.

The idea of the game is basically to make it as far as you can through the factory floors. There is a meter that keeps up with your progress and tells you how far you’ve went. Besides trying to get as far as possible, there are also missions each time you play through the game, which can change each time. This includes things like giving high-fives to factory workers or even trying to fall on your face for a certain distance after being knocked off the jetpack. There is also a system for leveling up by collecting stars, though it doesn’t really seem to be that important from what I can tell.

Like the idea of changing out items and getting knew gadgets? There are also two gadgets, one that gives an extra kick when jumping off the ground, another that speeds his descent towards it. There are also tons of vehicle power ups and special items like a gravity suit and even a dragon robot you can ride.

The best thing about this game is that it is free and yet it certainly feels more like a premium game. Like many free games from major studios, there is an in-app purchase system as well for buying coins and purchasing some of the more special additional items. The good think is they aren’t really necessary at all to enjoy the game, which is great. This in contrast to some games out there where you really don’t get a full experience without paying extra for such items. 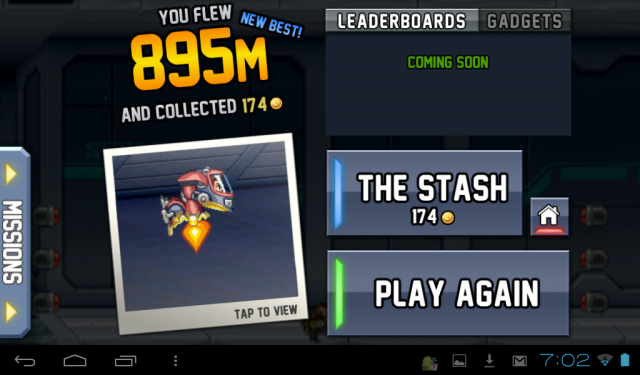 How good are the graphics? They are certainly cartoonish, but it fits the game’s experience and I wouldn’t want it any other way. The game is sharp and the action is fast, and the graphics hold up great for this style of game. Are they anything like you’d get with a modern console game? No, maybe not, but they are certainly on-par with the high-end Xbox Live Arcade and PSN Store games you find on your console for $5-$20 ranges, except for the fact that this game is totally free.

The audio and graphics are both essentially unchanged from the iOS version of the game, and while the soundtrack isn’t going to blow you off your feet, it’s very enjoyable and fits the arcade style action of the game like a glove.

This game is very addicting, have I said that already? It is fun to play, and hard to put down. The game is certainly humorous and something that you can play for ten minutes or thirty minutes, totally up to you. Here are just a few of the best things about the game:

Is Jetpack Joyride perfect? I’d say it comes pretty close, but no, it’s not. I’ve tested the game on my lower end Android phone, on a mid-range Android tablet and on my iPad 2. I came away with an opinion that Jetpack Joyride is great and relatively consistent across most devices, there were a few small freezes and glitches on a lower-end single-core Android smartphone. For most users though, the Android version should be comparable to the original iOS version.

Besides that, there isn’t much else to complain about, but I’ll try. There isn’t a way to sync progress between multiple devices, like Android phone and tablet, or iOS and Android- so for those with multiple devices, you have to choose a platform to play the game on and stick with it if you care about unlocking things and racking up points, etc.

Another slight negative is that it is only available through the Amazon AppStore, which means it is only officially available in the U.S. Market for now for Android users. It is likely only a matter of time before Google Play gets it as well, I’d wager. 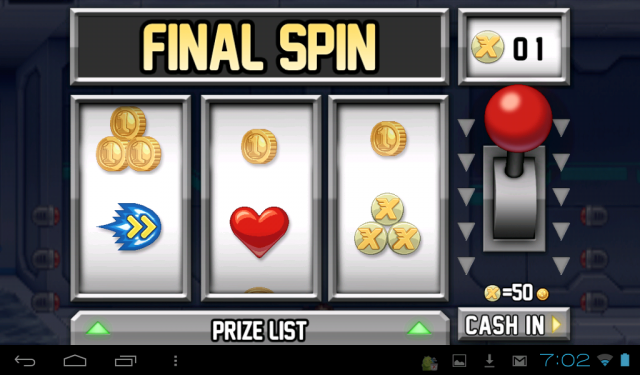 This game is free, so you have absolutely nothing to lose by trying it out, except maybe a few minutes of your time. If you like fast-action games that are trying on your reflexes, you’ll love this game. It has a great feel that mixes that old-school arcade design with modern action and style.

You can find the game through the Amazon AppStore or Apple AppStore, depending on whether you need the iOS or the Android version.