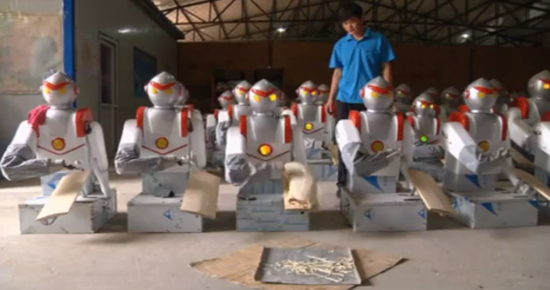 At this point in time, robots aren’t very good at tasks that require intuition, common sense or human judgement, but they are fantastic at performing repetitive tasks on a consistent basis. We’ve already seen robots take over many of the functions at many factories, and now there’s a robot chef that is taking over the noodle-making process for a number of Chinese restaurants.

The robot is called Chef Cui and it has been in production since March. The robot doesn’t produce the dough for the noodles, but it does do a fantastic job at “shaving” the noodles off the block of dough. They say that it operates in much the same way as a set of windshield wipers. Bearing a vague resemblance to Ultraman, Chef Cui is far cheaper than its human counterparts.

In China, hiring a (human) chef to slice noodles costs the typical restaurant owner “more than 30,000 RMB (US $4,700)” a year. By contrast, Chef Cui only costs between 10,000 RMB (US $1,500) and 13,000 RMB (US $2,000) and that is presumably a one-time cost. I imagine the robot uses very little in terms of electricity and given its relatively simple task, there’s probably not much maintenance involved either. And the kicker? “The noodles made by this robot are as good as the man-made ones.” Indeed, the restaurant owner says that Chef Cui “is a great machine, and it is better than man.”

We tend to associate robot helpers with Japan, but it looks like China has a few robotic assistants in the works too. Today, it’s noodles. Who knows what tomorrow can bring?