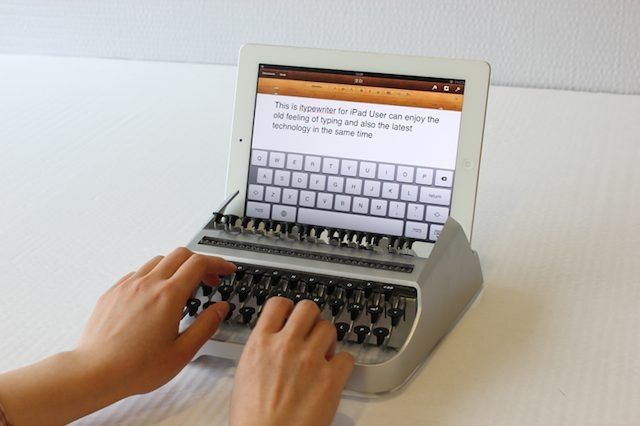 There are a lot of great accessories for the iPad and iPhone out there, many of which are inspired by retro designs. Can all retro ideas translate perfectly into the modern world? I suppose it depends on who you ask. The latest concept idea actually has a working prototype, and that’s the iTypewriter. That’s right, apparently this accessory is designed to let us relieve the glory days of old, back before touchscreens, computers, and even word processor machines. Because we all miss typewriters, right? (detect the sarcasm, by chance?)

I’ll admit, I think it looks pretty cool. Reality check though, is this thing worth using? It feels like typing on a real typewriter apparently, and even hits a small rubber hammer against your iPad to press the keys. I like the idea, think it looks neat, but as a writer myself, this doesn’t seem practical or useful at all.

The creator, Austin Yang, claims it might help those who aren’t part of the computer age connect better with technology- though it is beyond me how typing on a typewriter accessory is going to make navigating an iPad and using the menus easier for the elderly.

How about you, would you ever use such a ridiculous accessory? I suppose if it was dirt cheap (like $20 or less), I might consider it as a conversation piece or something, but that would be about it. What about you?