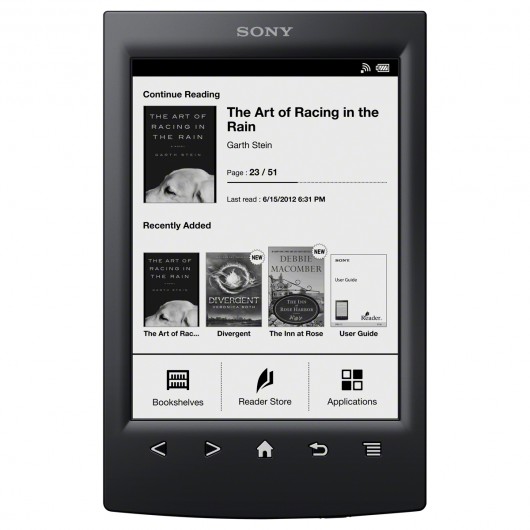 When it comes to reading in the digital age, generally most users either turn to an e-ink reader or use a tablet. For those that love e-ink, Sony has a brand new Sony Reader PRS-T2 which includes 2GB onboard storage, microSD for expansion, public library leading and new enhancements which include paper-like page turns and optimization to its 6-inch screen that is supposed to work better for long-term ad-free reading. For good measure, a few new social features are coming to the e-reader as well.

The PRS-T2 has a 600×800 E-Ink Pearl V220 antiglare screen with 16-level gray scale that is supposed to dramatically improve Sony’s e-reader line. The device also has built-in WIFI, a claimed two month battery life (with wireless off), and a new feature that lets you upload a short passage from your book directly to Facebook right from the device.

The Reader PRS-T2 features a 6-inch, 600 x 800 pixel resolution E-Ink Pearl V220 antiglare touch screen with a 16-level gray scale that promises improved continuous page turns and a smoother in and out pinch zoom. It comes pre-loaded with two English language and four translation dictionaries and supports ePub, PDF and TXT e-book formats, as well as JPEG, PNG, GIF, BMP image formats. There’s built-in Wi-Fi and a claimed battery life of up to two months with the wireless unit turned off (based on an average 30 minutes of reading per day).

The Sony Reader PRS-T2 is supplied comes in red,white or black and is priced at $129.99.