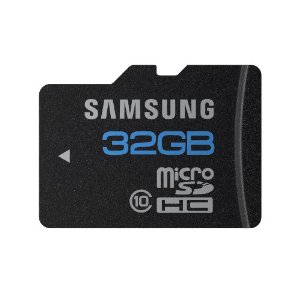 Want to expand the storage capacity on your smartphone or tablet? There’s a fantastic deal going on for a 32GB microSDHC card from Samsung, slashing the price down to a mere $27.99. That’s less than a dollar a gig on a memory card that’s barely the size of a fingernail.

It’s not out of the ordinary to spend about $50 more on a tablet that gives you an extra 8GB to 16GB of extra storage, but now you can spend just $28 and get 32GB of extra space! That’s fantastic for stashing more photos, music, videos and all sorts of other content for your mobile enjoyment. The 32GB capacity is enough for up to 8000 photos, 8 hours of HD video or 560 hours of MP3 music.

This is a Class 10 memory card too, so you know that it should be fast enough to keep up with even your highest of high-def entertainment. It’s been rate for up to 24MB/s read speeds and up to 13MB/s write speeds. Samsung has been the world’s top memory manufacturer for 20 years, so you know you’re getting the good stuff here too. Even if the card fails on you for whatever reason, it comes backed with a five-year warranty. The microSDHC card is waterproof, shockproof and magnet proof to boot.

Considering that the suggested retail price on this is $88.99, getting a Samsung 32GB microSDHC card for just $27.99 is a steal of a deal. That’s 69% off and includes free shipping too.