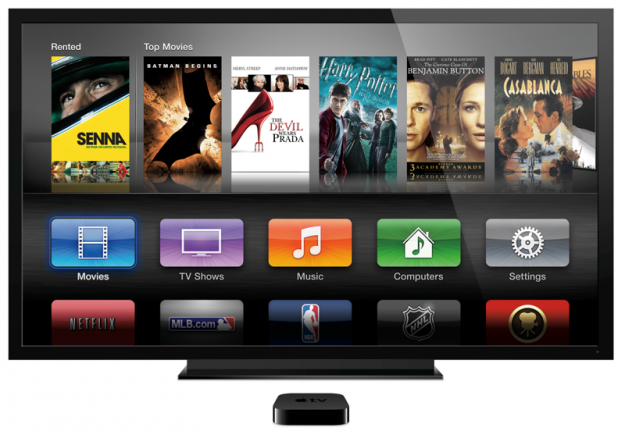 It seems that Apple started talking with a few different cable providers recently, with the goal of bringing a set-top box experience to cable subscribers. The idea with such a device would be to provide an Apple TV-like experience that also works through live TV and has special additional features like AirPlay functionality, iTunes capabilities (if cable providers would allow it) and more.

Why would Apple want to make such a move? The idea is simple, cable is where the content is. By working with a cable company, Apple could invade living rooms in a big way since set-top boxes wouldn’t need to be bought- instead you could rent an Apple TV box for a few additional bucks a month.

All we know for sure is that Apple is in talks to create something like a set-top box, the features and functions they are dreaming of are unknown, though I can certainly do a little speculating here.

Something tells me that, if they come up with an arrangement, it would involve streaming and sharing with iOS devices across the house. Imagine watching your favorite live TV channel through your iPad in the bedroom- while your set-top box is in the living room. Whether you would have to watch the same show that is playing on the Apple Box or if it would have an extra digital tuner is hard to say- but I could certainly see Apple trying a move like this. Keep in mind this is just speculation, so don’t take it too seriously.

Would cable providers go for it? Maybe, depends on how well they can profit. Just like DVRs allow recording of TV shows at a monthly additional cost for cable subscribers, networks like Time Warner could have a monthly fee for access to the TV show streaming capabilities. Imagine if you also do things like transfer DVR recording to the iPad and iPhone- that would be awesome, though probably less likely than the idea of streaming live shows.

If such a box existed, would you consider it? Do you think cable providers would go for such a thing?