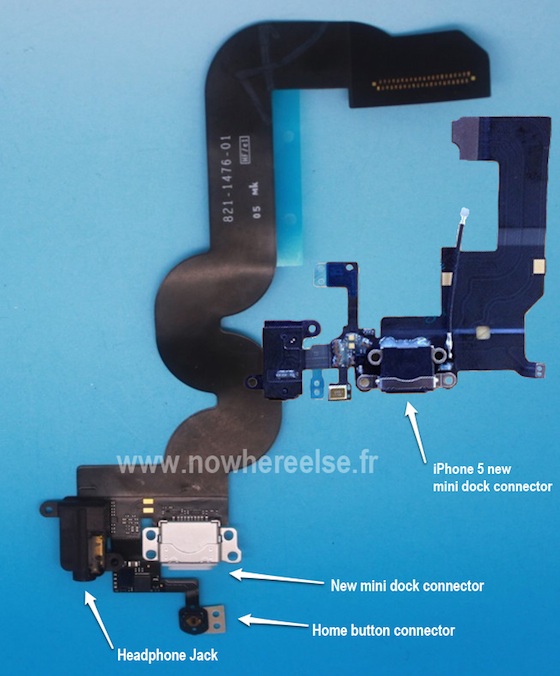 It looks like it’s pretty much for certain that Tim Cook and Apple are going to announce the new iPad mini next month and now we’ve got even more proof of the so-called 7-inch iPad. What you see here are some leaked photos and they’re reportedly displaying the dock connector flex cable for the iPad mini.

This flex cable picture is noteworthy for a few reasons. First, the cable appears to be showing the rumored smaller dock connector and, while it’s a little hard to tell, it looks like they’re moving toward the 8-pin or 9-pin variation that we’ve been seeing. That’s in line with the most recent rumors about the smaller dock connector, which leads us to believe that the number of pins won’t be in the “teen” range. This should be the same dock connector that we’ll be seeing on the next-generation iPhone too, which should also be revealed next month.

That said, there is at least one thing that is strange about this flex cable for the iPad mini. Yes, the home button connector looks like it’d be around the right place, but why is the headphone jack located just to the left of there? This would imply that Apple is moving the headphone jack to the bottom of the iPad mini, which is very different from the top-mounted placement for every other iDevice on the market right now, including the current iPad and iPhone. Other rumors have already told us that the headphone jack would stay at the top, so now we’ve got conflicting “evidence.”

At the same time, iFixit’s Kyle Weins is saying that this photo is “consistent with being an Apple component,” but there’s no way of knowing whether this is truly legitimate until the iFixit guys tear apart a real deal iPad mini. That’s okay. We’ve only a month to go, right?